As I mentioned earlier in August, the inimitable Cordy of Any Merry Little Thought is hosting a Month of Classics blog party this month!  A month-long blog party.  Devoted to classic movies.  How can I resist? 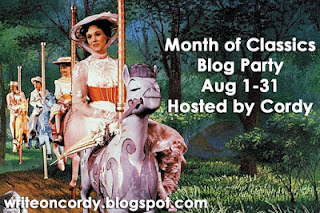 I can't resist.  I must join.  So I hereby present unto you the list of my Ten Favorite Classic Hollywood Film Composers.  It's been much too long since I did a Ten Favorites list, hasn't it?  Anyway, I thought composers would be a worthy thing to think about because movie soundtracks are one of my favorite things to listen to.  I collect them, in a way.  So here are ten composers whose name on a soundtrack will guarantee my interest in it.  They've all scored movies that I love, which helps too ;-)

I've concentrated on the Classic Hollywood era for this, since that's what Cordy's blog party is all about.  All of these composed scores for films made between 1935 and 1965, and many of them were active after that as well.

All of the movie titles I mention here are linked to a piece of music from that film on YouTube so you can get a taste of them!

1.  Elmer Bernstein.  He's actually my favorite film composer from any era.  From The Magnificent Seven (1960) to The Man with the Golden Arm (1955) (both of which I've been known to listen to on repeat until my family begs me to stop) to The Great Escape (1963) to The Sons of Katie Elder (1965), I love the music he wrote.

2.  Henry Mancini.  Nobody wrote cool, snazzy, finger-snapping music like Mancini.  His theme for The Pink Panther (1963) has been a favorite of mine since I could barely walk -- I used to "dance" to it when my parents played their Mancini 8-track on the Hi-Fi.  He wrote music for John Wayne in Hatari! (1962), for Cary Grant and Audrey Hepburn in Charade (1963), and for Glenn Ford in Dear Heart (1964) -- each score as unique and iconic as the people starring in the films.

3.  Ennio Morricone.  He scored the entire Man with No Name Trilogy, and I think his music did just as much to make Clint Eastwood a star as Eastwood's own charisma.  You no doubt know the main theme for The Good, the Bad, and the Ugly (1966), but I prefer this song from that soundtrack.  And I love his music for A Fistful of Dollars (1964) and For a Few Dollars More (1965).  He was still composing as recently as 2016, and his music for movies like The Untouchables (1987) and Hamlet (1990) shows how much he's grown over the years.

4.  Miklos Rozsa.  All you really need to know is that he scored Ben-Hur (1959).  That alone would grant him immortality.  But movies as diverse as Ivanhoe (1952) and Double Indemnity (1944) showcase his mastery as well.

5.  Victor Young.  I've just about got his score for Shane (1953) memorized.  I'd love him for that alone, but he scored oodles of John Wayne movies like The Quiet Man (1952), not to mention quite a few other Alan Ladd movies.  I hear a lot of his music these days.


I hope you enjoy some of this music -- maybe even all of it!  Don't forget to visit the rest of the blog party for more Classic Hollywood fun :-)
Posted by Hamlette (Rachel) at 3:57 PM