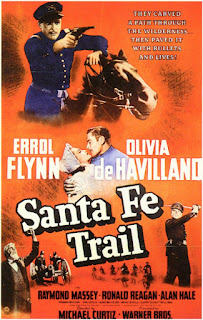 This is the first movie I ever saw Errol Flynn or Ronald Reagan in!  Possibly the first Van Heflin movie I saw too, though I'm not entirely sure -- I might have seen 3:10 to Yuma (1957) before this.  My first Olivia de Havilland movie was Gone With the Wind (1939) though, as I saw that when I was just a kid.

But anyway, I saw Santa Fe Trail for the first time when I was a teenager, and I didn't care much for it.  I was expecting a cowboy movie, for one thing, and this isn't really a cowboy movie.  It's actually a pre-Civil War story about newly minted cavalry officers with famous names fighting to subdue Bloody Kansas.  So it's a western, but a cavalry picture, not a cowboy movie.  I didn't really start appreciating cavalry pictures until I was an adult, with the exception of She Wore a Yellow Ribbon (1949), so I'm not surprised that I didn't like this when I was younger.

Best pals Jeb Stuart (Errol Flynn) and George Custer (Ronald Reagan) get into trouble for fighting with a fellow student named Rader (Van Heflin) just before they graduate from West Point.  Rader was spreading abolitionist literature, and all politics have been banned at West Point, so while Stuart and Custer are reprimanded, Rader is dishonorably discharged from the Army and West Point.

At their graduation, Stuart, Custer, and some of their pals get sent west to Fort Leavenworth to help keep the peace in Kansas Territory, which is filled with violence between abolitionists and anyone they don't like.  One of their pals has a sister named Kit Carson Holliday (Olivia de Havilland), a pretty girl who is prone to shouting "Yippee!" at improper intervals. 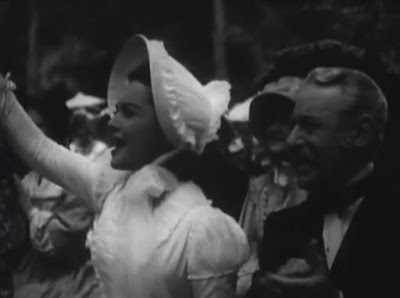 Custer and Stuart do their best to get to know Miss Kit better on the train ride west.  She's returning home after a few years at a "finishing school" back East. 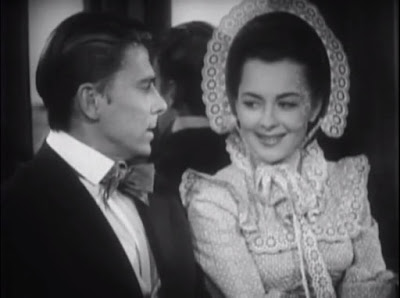 Kit's also the sort of girl who tells vaguely inappropriate stories involving bathtubs that shock her father and make Jeb Stuart look at her like this: 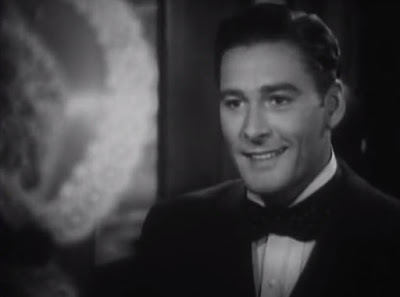 Yeah, there's really no question as to where this is going, is there? After all, this is de Havilland and Flynn's seventh movie together, and as they generally end up together, we all can be pretty sure that Kit's going to end up with Jeb Stuart, not George Custer.

Interestingly, de Havilland and Flynn would make only one more movie together, They Died with Their Boots On the year after this.  In it, they play George Custer and his wife.

Anyway!  When they arrive in Kansas, we quickly learn that Kit has a good head for business, as she sets about fixing up her father's freighting company.  It's gotten all disorganized while she was back East, so she sets about scolding everyone and putting things in order. 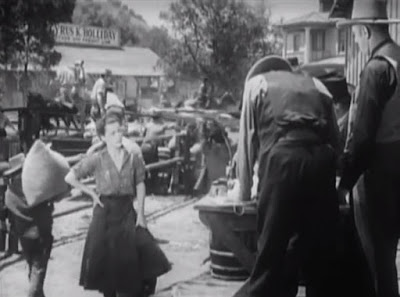 Even so, she still has time to look pretty and have a good time.  She IS played by Olivia de Havilland, after all.  Even with smudges of dirt on her face, she's still radiant. 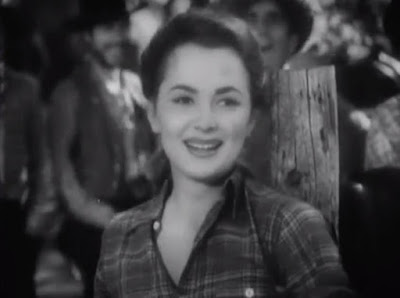 Naturally, Custer and Stuart both want to woo Kit.  Stuart suggests drawing straws for who gets to go say goodbye to her first before they head out to guard her dad's freight shipment to Texas.  They take this extremely seriously, as you can see. 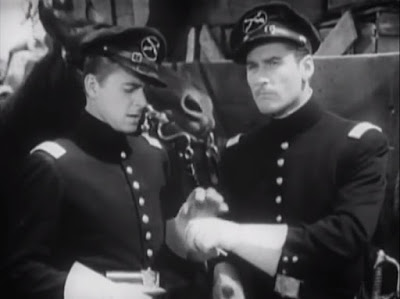 Let's all just admit that this review is an excuse to post a bunch of screencaps of Olivia and Errol, shall we? 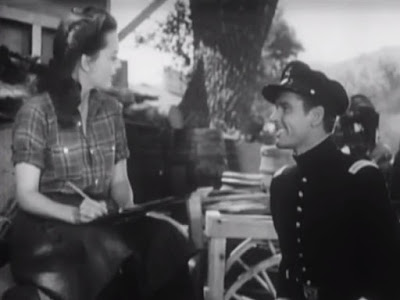 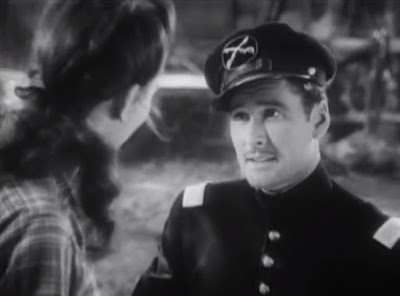 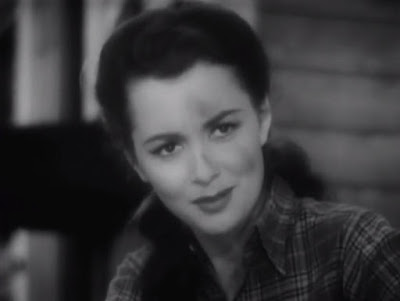 Okay, but back to the plot.  Chief among those trouble-causing abolitionists is John Brown (Raymond Massey), who is leading a kind of guerrilla campaign with the help of his sons and a bunch of followers.  And guess who's come to join his band?  Their ex-classmate Rader, of course.  And also Ward Bond, because a little Ward Bond makes every movie better, right?  Even when he's a Bad Guy. 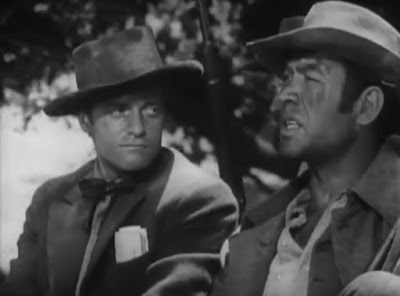 So then a bunch of exciting things happen, like John Brown's men trying to rob Kit's dad's freight wagons that Stuart and Custer are guarding.  Custer and Stuart ride around looking nice in their uniforms. 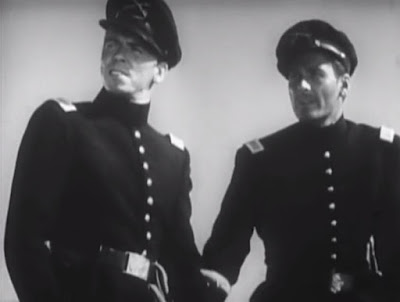 We get an exciting chase scene, too. 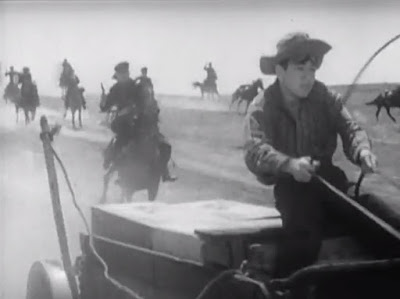 When I watched this movie in preparation for writing this review, I let my kids watch it with me because they all like Olivia and Errol so much in Adventures of Robin Hood (1938).  They watched it companionably enough, but afterward, they mostly talked about how much they liked "the silly guys," aka Hale and Williams, and how funny John Brown's fake beard looked. 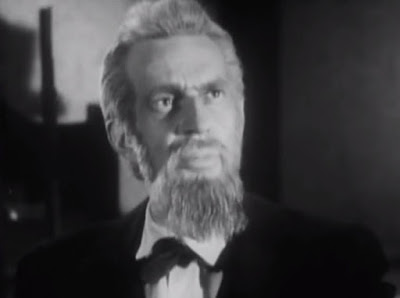 Eventually, Stuart changes out of his uniform into a cowboy outfit so he can go spy on John Brown's bunch, and he looks so wonderful there that I have to include a couple of screencaps. 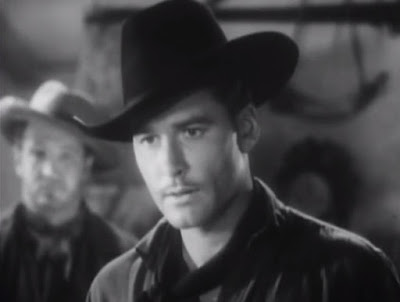 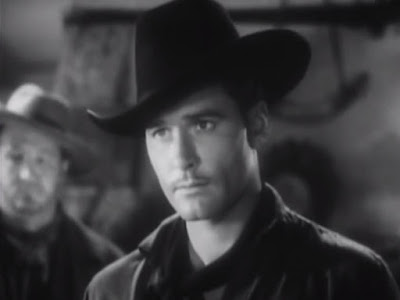 Goodness, he should have worn that hat much more in this movie.

Also, he almost gets lynched.  And if there's one thing I love, it's a good averted lynching. 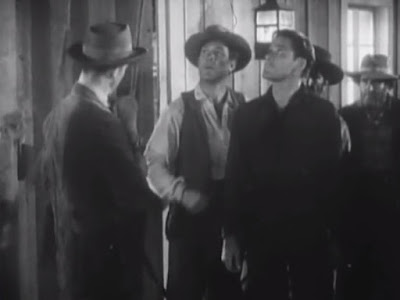 So I kind of figured this movie would end with them driving John Brown out of Kansas.  But nope!  It went on through the attack on Harper's Ferry and Brown's capture and execution.  While the acting is all perfectly fine, I have to admit that the story drags.  This is one to watch if you're a fan of the people in it, or of semi-factual retellings of things that led up to the American Civil war.  But if you want a really good cavalry picture starring Flynn and de Havilland, watch They Died with Their Boots On instead -- it's way better.

Is this movie family friendly?  Mostly.  I was rather shocked to find it had two mild cuss words in it toward the beginning, actually.  There's also a lot of old-movie shooting and fighting.  Like I said earlier, I let my own kids (ages 5, 7, and 9) watch it with me.  You can watch this for free on Amazon Prime Instant Video if you have Amazon Prime, and there's usually a copy floating around YouTube too.  I watched on Amazon, but the picture quality wasn't great, as you can tell from my screencaps.  There's a restored version available on DVD that you can also pay to watch on APIV if you want to. 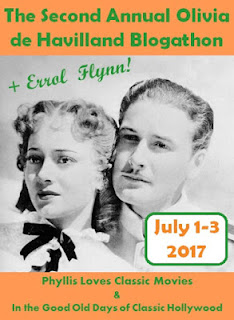 This has been my contribution to the Second Annual Olivia de Havilland Blogathon (+Errol Flynn!) hosted by Phyllis Loves Classic Movies and In the Good Old Days of Classic Hollywood.  Olivia de Havilland turns 101 today!  So amazing that she is still with us.  Happy birthday, Ms. de Havilland!
Posted by Hamlette (Rachel) at 9:08 AM