#RebelliousWriting -- What's it All About? 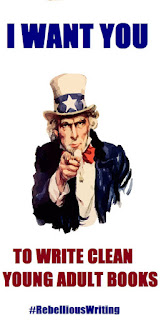 You may have noticed this little badge in the sidebars of both my blogs.  If you have, you may have wondered what it means, aside from obviously being a call to writers to write clean YA books.

Basically, it's a movement started by a couple of bloggers.  A couple of US, in other words.  A writer called Gray Marie started the ball rolling in this post by calling for others to join her in praising and supporting clean books, especially those aimed toward teens and young adults.

I first learned about #RebelliousWriting from this post of MovieCritic's, which led me to this post from Farm Lassie, then to Gray Marie's original post, and that very day, I added the badge to my sidebars.  But, having been so busy with my Gatsby read-along and so on, I haven't had time to talk about all this until now.

I have three kids.  My oldest is nine, and he loves books.  His reading level is somewhere around 5th or 6th grade, but I have a hard time finding him books that he likes that I'm okay with him reading.  Happily, he loves the Chronicles of Narnia and the Boxcar Children and Beverly Cleary's books, and he loves to re-read, so most of the time he just re-reads a book he loves or reads another one by an author I know we can trust.

But other times he wants to try a new book, and I'll have to flip through it first because... even in junior fiction and middle-grade fiction, I sometimes run up against things he's not ready for!  Or things I object to!  I mean, I picked up Waiting for Normal by Leslie Connor in the junior fiction section of our library a couple of weeks ago because I wanted to read it myself, it just looked so cute.  And in my review, I discussed how I loved that book a TON... but I won't let him read it yet.  Partly because it has a girl dealing with the onset of puberty, and I'm okay with that being in a book, but I think it would gross him out -- he's NINE, after all.  But mostly, I won't let him read it because there's an adult male character who has a boyfriend.

In a book aimed at grade school kids.

And I think back to books I loved in my tweens, like The Indian in the Cupboard by Lynne Reid Banks -- I adore that book, it's still one of my faves.  But it has several bad words in it.  Several!

Then when you get to YA books, it's like hey, let's just open the floodgates and let all the sewage in, shall we?  Just this week, I quit reading the book The Espressologist by Kristina Springer, which is about high school students and presumably written for them to read, because it had too much bad language in it.  And folks, I read grown-up books.  I can handle bad language in them.  I very much enjoy Lee Child's books about Jack Reacher, which are full of adult stuff.  Very adult stuff.  (But not graphic sex, I don't go there.  Keep that door closed, thanks.)  But in a YA book, if it's got adult stuff in it of any sort, I will probably quit reading it because... it's almost like I'm retroactively undermining my own innocence.  Which probably doesn't make sense, but there it is.  Also, the language in The Espressologist was primarily taking God's name in vain, and I am NOT okay with that.  In fact, I will put up with all manner of obscenities far more tolerantly than I will a "mild" case of taking God's name in vain. 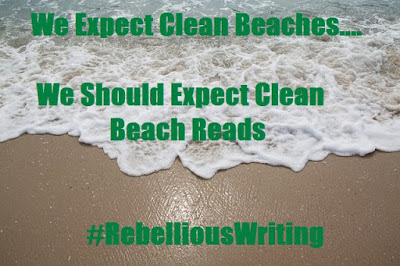 I always think of myself as a clean writer.  No cussing.  No sex scenes, though I do imply sometimes that consenting adults go to bed together -- that's in some of my Combat! fanfiction, which can also get violent, though I try not to write anything they wouldn't have shown on the original show in the mid-1960s.

But I now also write YA fiction.  I mean, I hope adults enjoy it too, but I do write with teens in mind. "The Man on the Buckskin Horse," my story in Five Magic Spindles, was basically YA-level.  And clean.  My new book Cloaked has a sixteen-year-old girl as a protagonist (because "Little Red Riding Hood" ought to be Not An Adult, don't you think?), and I rather expect that most of the people reading it will be in their teens and early twenties, just because that's probably who will be most interested in a book about a sixteen-year-old.  And I'm keeping this book clean, too.

So this whole #RebelliousWriting movement is important to me as a reader, as a mom, and as a writer.  And if clean books are important to you too, get involved!  #RebelliousWriting is getting its own website in a couple of weeks.  You can find details here for now, and you'll also find lots of links to cool blog posts and so on from the official Pinterest account. 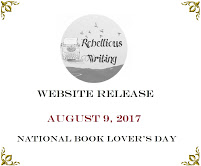