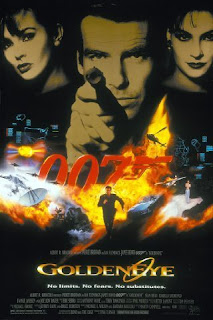 I have so many wonderful memories surrounding this movie.  It's the first James Bond movie I ever saw all the way through, aside from a couple parts my parents would skip for us.  This is probably why Pierce Brosnan remains my favorite Bond.  Judge all you like -- I'm sticking with him, and it's all because of GoldenEye.  It's my favorite Bond film too, even though I do recognize and acknowledge that there are better ones.  Don't care; I love this one.

So, when I was a kid, my dad would get the old James Bond movies out of the library if he was taking a sick day.  He didn't get sick often, but everyone gets a cold or the flu once in a while, him included.  And he loved the old Sean Connery and Roger Moore 007 movies.  Once he was feeling better, and no longer contagious, a lot of times he'd show my brother and I the stupendous opening sequence to whichever 007 movie he'd gotten this time.  I must confess I don't even know which movies some of them go with, but I have great memories of Bond ski-surfing, jumping off cliffs, etc.

Now, my dad never liked Timothy Dalton as 007.  But when the new guy named Pierce Brosnan took over the role, Dad rented GoldenEye when it came to the video store.  If you remember life with video stores, then you know this was about six months after the movie was in theaters.  We had it rough back in the '90s, kids.  It was another three months or so before we could buy our own copy on VHS.

Happily, my dad really liked this movie and this 007.  And before he took the tape back to the video store, he showed my brother and I the opening sequence.  I still love it so much.  James Bond (Pierce Brosnan) bungee jumps off a dam.

He and 006 (Sean Bean) infiltrate a Russian chemical weapons facility and set a bunch of bombs.  They engage in witty repartee and buddy jokes.

I fell in love with Pierce Brosnan right here:

And I fell in love with Sean Bean right here:

That first viewing, I almost liked 006 better than 007.  I mean, his name was Alec (James and Alec are basically my two favorite guy names -- I loved them being the names of these two cool buddies!).  He had a lot of sarcasm, and I reeeeeeally liked his voice.  But if you're at all aware of who Sean Bean is, and what generally happens to him in movies, you know what comes next.

Yeah, they shot him in the head, and he's very, very dead, and it matters very little whether stone or lump of lead -- it is very, very certain that he's very, very dead.  (I may have loved that line from Gilbert and Sullivan's musical The Yoeman of the Guard a little too much.  I use it whenever I can.)  And so 007 blows the whole place up and escapes.

Oh, the feeeeeeeels!  I've cried so much over 006 dying.  More than once.  This was the first thing I ever saw Sean Bean in, and it was before he had died in quite so many movies, so I totally wasn't expecting it, I was expecting that this would be a snarky buddy-comedy James Bond movie, and then nope, death to 006.

In fact, my dad let us watch just that opening sequence many times over the course of several months before he ever showed us the whole movie.  So I got really attached to 006 and 007, and that whole opener remains my favorite part of the film.

But the movie does continue after that part, and eventually my dad had watched it often enough to know where to skip things and mute bad words.  So I finally got to watch the whole movie.  After my beloved opening sequence, nine years pass for Bond, and then off we merrily go to London, where we meet the new M (Judi Dench), who is... (drumroll please)... a woman.  Edgy stuff.  A woman ordering James Bond around!  Sounds really lame now, but this was kind of a big deal twenty years ago.  Like, I was sixteen at the time, and I found the new M very scary.  I didn't like her.  She yelled at James Bond too much.  Nowadays, I absolutely love her, and Judi Dench is one of my favorite actresses, but at the time... she scared me.  Kind of a lot.

Anyway, James Bond gets sent out on a new mission.  All about hackers in Russia and a missing electromagnetic pulse device and a nuclear space weapon, the usual exciting, high-tech, implausible, delightful stuff James Bond movies are made of.

Plus, we meet up with a Russian computer programmer named Natalya (Izabella Scorupco).  She's smart, she's sassy, and she's the Bond Girl of the day.  I like her much more than most Bond Girls because she doesn't just fall into Bond's arms immediately, and she's got a lot of guts.  She generally doesn't need rescuing, and is one of the first strong female characters I genuinely admired.

We also meet up with freaky-deaky hit-woman Xenia Onatopp (Famke Janssen), so named because we have to have some kind of weird double-entendre-laden name in here somewhere, it's kind of a rule.  She kills people a lot.  In strange ways.  Hers are the scenes we had to skip when I was a kid.

SPOILERS AHEAD!!!!!  Lots of spoilers.  Spoilers and more spoilers and still more spoilers.  Okay, maybe not that many, but I'm going to spoil a big plot twist, so skip to below the picture of James Bond and Natalya if you don't want to be spoiled.

I think GoldenEye holds the distinction of being the only movie in which Sean Bean gets two death scenes.  First he got shot in the head in the beginning, but he didn't actually, he was just staging his own death.  Now he's the bad guy orchestrating everything, and man, when I found that out the first time, I was sooooooo angry.  And so happy.  Happy that I got more Sean Bean to watch!  Angry because he was the bad guy now!  All the mixed-up feelings a teen could feel.  Because I'd gotten so very, very fond of him from watching the opening sequence over and over and over before I saw the whole movie, and now I felt very betrayed.  Much like James Bond feels!

Of course, Sean Bean has to die at the end.  He's the Bond baddie AND he's Sean Bean, so it's required.  Sniffle.

Is this movie family friendly?  Not really.  Xenia Onatopp kills people by squeezing them to death between her thighs, sometimes during sex.  There's some bad language, there's a good bit of violence.  Like I said, my family always censored parts of this -- in fact, we permanently censored our VHS copy by recording over several scenes.  We recorded bits of a documentary about building castles over them, and from then on, my brother and I referred to the process of censoring scenes in any of our family's movies as "castle building."  I miss being able to do that -- you can't "fix" movies on DVD like you could on VHS.  In fact, I own three or four movies on VHS I refuse to replace with DVDs because I want the edited versions, not the originals.  Sigh. 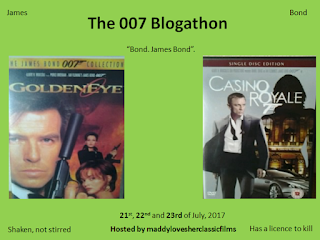 This has been my entry for the 007 Blogathon hosted by MaddyLovesHerClassicFilms.  Be sure to drop by her blog to find links to the other entries.
Posted by Hamlette (Rachel) at 4:13 PM