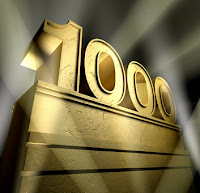 This is my one thousandth post here on Hamlette's Soliloquy!  I've been trying to figure out something special for this post.  But I just finished a giveaway, my list of my favorite 100 movies isn't ready yet, and I did an AMA not all that long ago, so... what to do?

I've decided to just share some of my old headers with you, because I've had quite a few over the past couple of years that I liked a great deal.  So here we go, a trip down blog memory lane.

When I started this blog, way back in 2002, I had a completely different background, something with a lighthouse.  I just had my name across the top, no fancy header.  I switched to this red curtain background sometime around 2009, I think, figuring it was fitting for a blog named after something from stage plays, in which I discuss a lot of dramas and such.  But I just had my title up at the top with no images until September of 2014, when I changed it to this for my Piratical Blogathon:

Once I got a taste for creating headers, I started swapping them out pretty frequently.  I made this one for Christmas that year:


I soon changed it to this:


I only had that one for a couple of months, though, because I changed it to this while working on the Middle Earth Movie Meme:

Then I decided I really should have Hamlet on my header for a while, so I swapped it out for a shot of Jude Law in Hamlet on Broadway from back in 2009:

I changed it up again for Legends of Western Cinema Week:


I swapped that out for this Man from U.N.C.L.E.-themed header:


I liked that one so well, I didn't change my header until Christmas:

I created this one for Cinderella Week:


And, just for posterity, here's the one I have right now, which features all the regulars on Combat!, which I created for 1940's Week:

I don't plan on swapping this out any time soon, but you never know... I might join some blogathon or find something to celebrate or just find a picture I reeeeeeeeally like....

Anyway, I also want to say thank you to all my lovely blogging friends for reading my posts, commenting on them, and generally being swell pals.  Thank you!!!  I wouldn't have stuck with this for 13 1/2 years if it hadn't been for all of you.