My Ten Favorite Movies Set in the 1940s 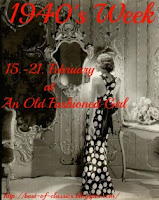 In honor of 1940s Week over at An Old-Fashioned Girl, I've put together a list of my 10 favorite movies that take place during the 1940s.  Because I'm fascinated by how WWII affected the military and civilians alike, and how it changed the world on so many levels, you'll notice that many of these directly involve the war. 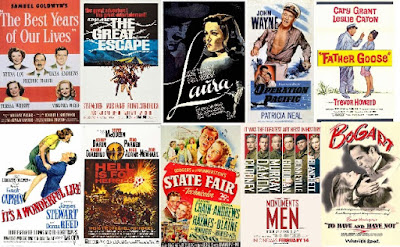 The Nazis put all their worst eggs (Steve McQueen, James Coburn, Charles Bronson, James Garner...) in one prison camp, and naturally all those escape artists work together to escape. I love this on so many levels, from the whole band-of-misfits-working-together angle to the clever planning to the actual escape itself. And it's based on a true story!

While solving the murder of beautiful, talented Laura Hunt (Gene Tierney), Detective Mark McPherson (Dana Andrews) falls in love with her memory. One of the most haunting murder mysteries with one of the biggest plot twists.

Commander Duke Gifford (John Wayne) leads a submarine crew on a bunch of adventures (most of them based on actual WWII events) and tries to win back his ex-wife (Patricia Neal). My 8-year-old son asks to watch this at least once a month right now. This is a clean and lovely movie.

A misanthropic drunk (Cary Grant) reluctantly becomes an island spotter during WWII and winds up caring for a group of young girls and their oh-so-proper chaperon (Leslie Caron). This is both sweet and salty, and I love it dearly.

George Bailey (James Stewart) decides he's worth more dead than alive, and it takes an unlikely angel (Henry Travers) all of Christmas Eve to convince him otherwise. There's a reason it's so famous -- it's really that good.

One small American Infantry squad (Bobby Darin, Steve McQueen, Fess Parker, James Coburn, Bob Newhart...) holds off a Nazi attack thanks to lots of clever ruses and some spectacular sacrifices. This was written by Robert Pirosh, who also created my beloved Combat!, and this whole movie almost feels like a long episode of the show.

A family spends a week at the Iowa state fair, where the daughter (Jeanne Crain) falls in love with a newspaper man (Dana Andrews), the son falls in love with an entertainer, and the parents take home prizes for their mincemeat and hog. There's a 1960s remake that stars Bobby Darin in the Dana Andrews role, but aside from dearest Bobby, I feel that version lacks the charm of this one.

Fisherman Harry Morgan (Humphrey Bogart) gets tangled up with a wandering woman (Lauren Bacall) and a bunch of anti-Nazi French patriots during WWII. Loosely based on characters from the Ernest Hemingway novel by the same title, but I like it far better than the book.
Posted by Hamlette (Rachel) at 4:33 PM