To honor Maureen O'Hara after her recent passing, I'm sharing a list of my ten favorite films that she starred in.  Comedies, westerns, swashbucklers, dramas -- she could handle them all. 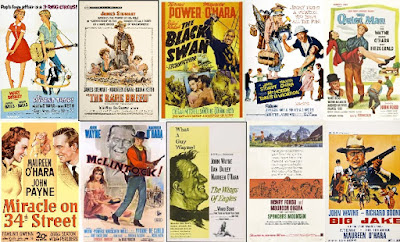 Twin sisters (Hayley Mills as both) with divorced parents (Maureen O'Hara and Brian Kieth) scheme to bring their parents back together.  It's been one of my favorite movies since I was a teen.

A British widow (Maureen O'Hara) and her daughter (Juliet Mills) accompany the prize bull they've sold on its way to its new owner (Brian Keith) with the help of a determined cowhand (James Stewart).  I've seen this so often, the characters all feel like dear old friends.

Roger Hobbs (James Stewart) and his wife Peggy (Maureen O'Hara) vacation with their family in a decidedly eccentric house, encountering many gently comic adventures. This is one of those movies I quote all the time in my head.

An American ex-prizefighter (John Wayne) moves to Ireland and marries a feisty native (Maureen O'Hara) who believes he is a coward and refuses to live with him as man and wife until he proves her wrong.  A dramatic and beautiful movie.

A rich rancher (John Wayne) battles his estranged wife (Maureen O'Hara), daughter, land-grabbing bad guys, and various other adversaries.  Almost a western version of The Taming of the Shrew.

The true story of a Navy pilot (John Wayne) who is paralyzed after an accident, and regains the ability to move with the help of his best friend (Dan Dailey) and wife (Maureen O'Hara).  Such an inspiring movie!

A hardworking man (Henry Fonda) has to decide if he should build his wife (Maureen O'Hara) the home he's promised her for years or send his son (James MacArthur) to college.  Based on the novel by Earl Hamner, Jr. that also inspired the TV show The Waltons a few years later.

A rich rancher (John Wayne) returns to his home after years of roaming when his estranged wife (Maureen O'Hara) telegraphs him that their grandson (Ethan Wayne) has been kidnapped.  The more modern setting (1909, with cars and motorcycles) saddens me in many ways, but it's a solid story and has lots of familiar faces.
Posted by Hamlette (Rachel) at 6:20 PM