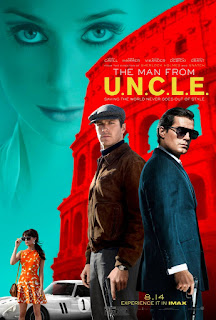 I need to see this movie again.

There had better be a showtime that works next weekend, because I need to see it again.

Partly I need to see it again because I want to decide if I liked it or if I loved it, and I'm having trouble deciding.  Because it wasn't an automatic love, but I think it could be an acquired love.  Like The Lone Ranger (2013) -- the first time I saw that, I said in my review, "Did I love it? Maybe. Did I like it? Absolutely. Will I buy the DVD? Definitely."  Same goes for The Man from U.N.C.L.E.  (And weirdly enough, they both star Armie Hammer.)

Okay, so basically this is a spy romp with a tangy old-school flavor and a nothing-is-all-that-serious texture.  The whole world is not in danger, the human race is not about to be exterminated, no one is going to wipe out the electronic records of an entire nation or kill the US President or expose every secret agent the US has.  Someone is trying to build a nuclear bomb.  That's bad, but that's not oh-my-goodness-the-fate-of-the-universe-hangs-in-the-balance bad.  Which is great, because it gives this whole movie a more relaxed feel.  We can laugh.  There can be sight gags and double-entedres and funny little jokes, and they don't feel out of place.


And there's also this other guy named Napoleon Solo (Henry Cavill) who looks nice in a suit and likes to steal stuff.  He's an American secret agent, and Illya is a Russian secret agent, but they have to stop punching each other and start punching other people together in order to stop the bad guys trying to build a bomb, etc.


Also, there's a girl named Gaby (Alicia Vikander) who is all mixed up in the plot, which I don't feel like detailing, but she was so much fun -- smart and sassy and savvy and cool.  Also, an auto mechanic.  Also, she got the coolest '60s clothes.

I adored the '60s setting, all the cool clothes and cars and buildings and hair -- I watched so many '60s movies growing up that I almost feel at home in that era, and so this was like a wonderful nostalgia trip for me even though I wasn't born until 1980.

So if you're looking for a lighter spy movie to relax with before the summer ends, please go see this!  It's a good ride.

Ahh, but is it family friendly?  Um, not totally.  A very small amount of bad language, almost entirely slang words for various body parts.  No taking of God's name in vain that I recall.  There's a shot of a woman from behind who is only wearing panties, and she turns so you can see the outline of more, but it's a silhouette and very vague.  There's quite a bit of suggestive material like what you would find in a '70s James Bond movie -- the implication that people are having sex, a guy and a girl wrestling -- lots of suggestion, no actual love scenes.  Still, not something I'd take young teens to.  There's also quite a bit of violence, a character with anger management issues and the mention of psychotic episodes, and a torture sequence that made me worry and squirm, though it wasn't graphic.  Very low on blood and guts, as most of the violence is implied.

Finally, I leave you with this picture of the original Napoleon Solo (Robert Vaughn) and Illya Kuryakin (David McCallum) from the 1960s TV show.  My mom had the hugest crush on this version of Illya, so I'm finding it amusing that one of my own favorite actors is now playing him. 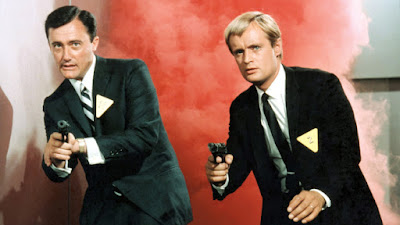