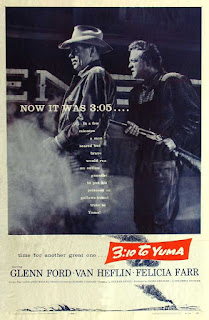 Just so we're clear, I'm not holding back in this post.  I will spoil things.  I want you to see this, if you haven't, but I also want to discuss the subtext and themes, all the juicy, meaty goodness this movie contains.  And I can't do that without discussing plot points.  For my mostly spoiler-free review, read this post instead.  I'm sorry this post is kind of a long time in coming -- I was real busy last week with VBS, and over the weekend, I caught a head cold.  Happily, I about had this post half-written last week, so today I can just finish it up.

Why do I love this movie?  Sure, it's a western, and nothing scratches my personal itches like a good western.  But there's more to it than that.  As I said in my regular review, 3:10 to Yuma follows a reluctantly deputized rancher who does his best to ensure that a smooth-talking outlaw gets put on the train to prison, during which they develop a grudging respect for each other.  And it's that development of respect between them that particularly fascinates me. 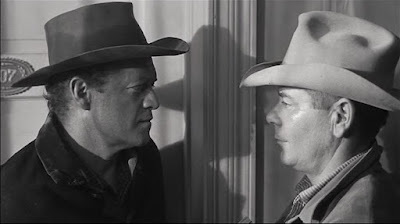 I said that this movie is more akin to film noir than typical westerns, and that's true in that it highlights the boldness of men outside the law, and shows how impotent lawmen can be in the face of determined sin.  But it does not hold true to all noir tropes.  Emmy (Felicia Farr) is no femme fatale -- she does not lure Ben Wade (Glenn Ford) to his doom, though by following his own inclinations, he meets with trouble nonetheless.  And it lacks that sense of helplessness and hopelessness that fills most noir.  But 3:10 is crammed with psychological drama, like good noir, and much of the cinematography echoes the noir fascination with light and dark, unusual camera angles, and using macabre or shocking images to make a point. 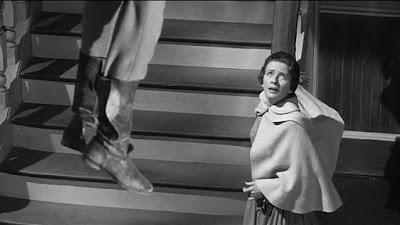 In my first post, I spent most of my time talking about the film's set-up, why Dan Evans (Van Heflin) needs that $200, and why Ben Wade (Glenn Ford) hung around town too long and got himself captured.  But as much as I enjoy the first half of the movie, with its quiet desperation, it's the second half that engrosses me.  Because it's there that the psychological drama comes into play, as Dan and Ben wait for the train in a small room and fester. 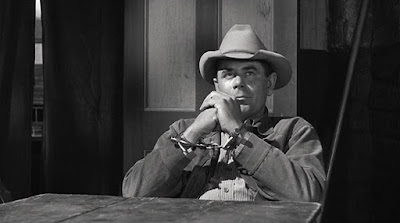 Ever since he got captured, Ben Wade has been studying Dan Evans.  He underestimated Dan initially, a mistake he rues, but doesn't dwell on.  He'd believed Dan to be a simple, uncomplicated rancher more interested in his own safety, and in making a couple bucks, than in seeing justice done.  And in a way, he's right -- Dan doesn't want to be involved in transporting Ben Wade to that train.  He wants to get back to his cattle and his family, and only the lure of the $200 he needs to buy water rights for his drought-stricken cattle entices him to help out.  But Ben quickly realizes that Dan is just as intelligent and determined as himself.  Ben has more cunning, but Dan has more conviction, and it is not obvious for a minute which will win their battle of wills. 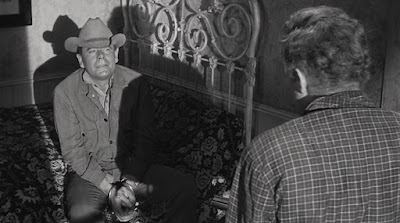 Once they're settled in that hotel in Contention City, waiting for the train to the Yuma prison, Ben begins talking.  Calmly, quietly, almost soothingly, he talks to Dan about risks, about danger, about ranching and cattle and water and money.  He tries one angle after another, patient and unruffled, his mind always working ahead, searching for something he can use to win Dan over.  He wants to be let go, he's fairly sure his men will be able to spring him, but he'd rather skip all that fuss and violence and find an easier way out. 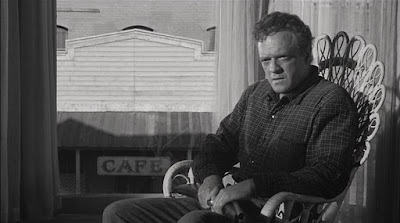 But nothing works.  None of his wiles or ploys gets Dan to relinquish his hold on that rifle, his determination to see Ben Wade to that train.  And a surprising thing happens:  Ben starts to respect Dan.  He's seen Dan's family, what kind of a peaceful, happy life Dan has, and he envies that.  He admires Dan's courage, his stubborn resolve.  He never stops trying to talk Dan into letting him go, though, not even after the time comes for them to walk out of the hotel and over to the train station. 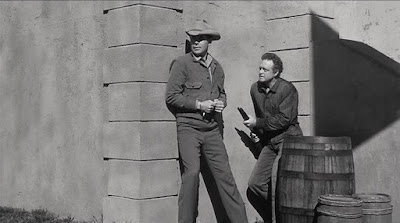 By this time, Ben Wade's whole gang is in town, and they shoot at Dan from every angle, forcing him to use Ben as a shield when he can as they duck and sprint and hide and generally do everything possible to avoid getting shot. 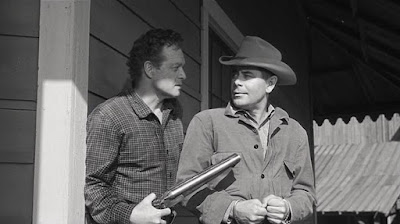 Now, back when Ben Wade was at Dan Evans' home briefly, he told Evans' wife, "I hope I can send him back to you all right."  I feel like he was being sincere here, not flippant -- that even though Evans tricked him into getting captured, he holds no personal grudge against him and would like him to come through this alive, able to return to his wife and sons.  Especially since already there, Ben Wade is starting to envy Dan that life, that wife and those sons. 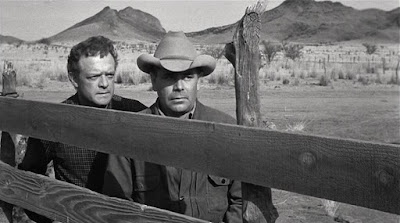 Ben and Dan are kindred spirits, in a way, opposite sides of the same coin.  As they come to realize this, their respect for each other increases.  And so, as Ben skulks around Contention City with Dan's gun trained more or less on him, he starts to be helpful.  Warns Dan there will be one of the gang around the corner.  Gives him ideas on how to get through this or that tight spot.  Cooperates when being contentious could have gotten Dan killed, and Ben freed. 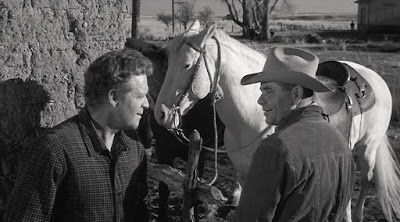 And then, they reach the train station.  Ben's whole gang is there, ready to gun Dan down when he makes Ben step out of cover toward the train.  And they do step out, with Ben's followers urging him to drop to the dirt so they can have a clear shot at Dan. 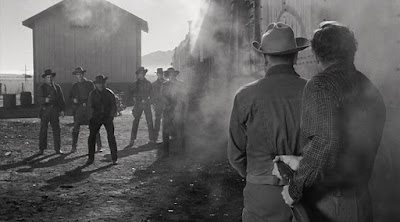 (The next couple paragraphs are MAJOR SPOILAGE.  Just so you know.) 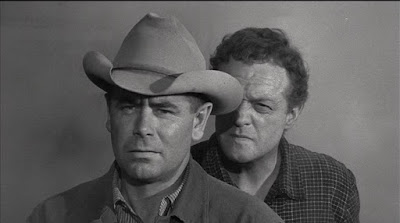 But Ben doesn't want Dan to get shot.  He wants to send this stubborn, ornery rancher back to his wife and kids.  In that moment, Ben puts Dan's future ahead of his own and suggests they jump on the train, which has started rolling out of the station.  Dan has to trust that Ben will jump too, but jump they do, landing safely inside an empty cattle car.  The impact knocks the gun from Dan's hands, but Ben makes no move for it -- he's decided that Dan needs to live, and that's all there is to it. 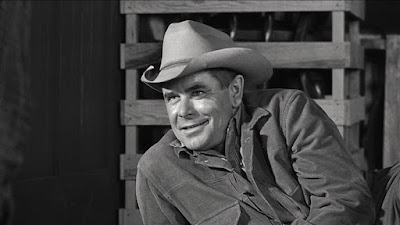 And, after this miracle of a desperate outlaw putting an honest man's life ahead of his own, a second miracle occurs:  it begins to rain.  The water that Dan Evans needed so desperately he was willing to risk his life to earn money enough to buy it -- that water is falling freely from the sky.  And Dan's wife, who drove to Contention City earlier and gave him renewed courage to see this task through... she's there by the train tracks, waving to them, rejoicing in the rain. 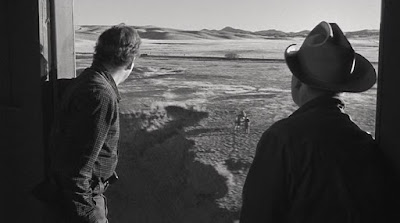 And here is my favorite shot from the whole movie: 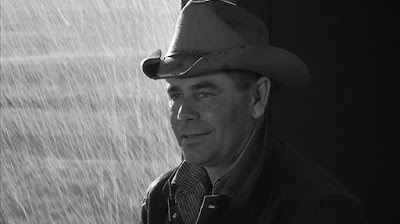 Look at the lighting here -- he's a man who's been living in darkness, but the uprightness of a man he has grown to respect has brightened his whole future.  By saving another man, he may have helped save himself in a way as well.  He says he's broken out of Yuma before, implying he's confident he'll do so again, but he's learned this day that confidence and silver words aren't always enough.  I feel like Ben Wade will be a more careful man from here on out.  Who knows -- he might even take a turn for the respectable one day.  Because he's found a respectable man who couldn't be bought, couldn't be conned, couldn't be swayed.

And Dan, he's learned just how tough he really is inside.  I get the feeling he's been afraid this drought will break him, that he's not hardy enough to weather it.  Now he's stood toe to toe with the legendary outlaw Ben Wade and triumphed.  Not much will shake him anymore. 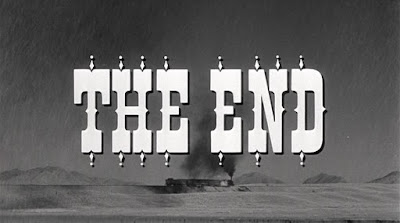 (Well, the end of this post, anyway.  I'm going to do one more on the use of cinematography, but I decided that should be its own post too.)
Posted by Hamlette (Rachel) at 9:07 AM