I'm an ISFJ Writer: Protect ALL the Characters!

Charity's been running a series on her Tumblr about how a writer's MBTI type informs their writing, and DKoren posted here about how and why she, as an ISTP, writes.  So here I am, jumping on the bandwagon :-)

I'll start with what Charity said here:  SJs are detailed and systematic in their approach, drawing heavily from their own experiences and/or interests and knowledge base. They proceed neatly point from one point to the next.

Boy, howdy -- that is me.  Some writers write scenes all out of order, whatever they're in the mood for or ready to write.  I've tried that a grand total of once, and it drove me nuts!  I need to know what has already happened before I can write what happens next.  How my characters behave is informed by what they've experienced up to then, and if I haven't written those experiences, I feel unprepared to write what they do next.  And in my own life, I rely on my memories to decide what to do in the present -- I treat emotional memory like muscle memory.

That also feeds into the fact that I do draw on my own experiences for my stories.  I've taken incidents from my life and used them for stories, I've taken my emotional response to something that happened to someone else and used that -- happens all the time.  Because I feel like sharing, I'll even tell you couple of specific examples:

The summer after my freshman year, I got the biggest crush on a guy who worked with me at my summer job.  We eventually went to a movie together, though just as friends.  And then about a week later, lo and behold there he was walking around with another girl, holding her hand.  Like getting hit by a car, I tell you.  I spent the next week writing a Combat! fanfic story about Billy mistaking a nurse's kindness for attraction.  A decade later, I ran into that same guy quite unexpectedly.  I have no idea if he recognized me or not, as I got very self-conscious and shy and kind of ignored him the best I could.  I spent the next NaNoWriMo writing three fanfic stories that grew from that incident -- one in which Sgt. Saunders meets up with a nurse he'd been romantically involved with over a year earlier, then the story of how they met in the first place, and a story that linked the two.  Although the story based on my own experience never quite gelled (yet), and I ended up cannibalizing things from the middle story for something else, the story of their romance is probably my best fanfic story ever, "The Better Part of Valor."


Also, like Charity said about drawing on a knowledge base, I struggle to write about things I don't know much about.  I want to do all my research before I start writing a story, not research as I go.  I don't like making factual errors, especially ones I could have avoided if I'd just done my homework, and since most of what I write is set in some historical era or other, this is pretty important.

Another example:  I fell madly in love with The Avengers when it was in theaters.  I'd never seen any of the previous movies, but I loved those characters so much I started writing an Avengers/Combat! crossover story.  Only I didn't really know the characters as well as I should have, particularly Tony Stark, and once I started watching the other Iron Man movies, I accepted that I was writing him all wrong and ditched the whole story because it wasn't working.  Hurt a lot, especially because I felt like, if only I'd done my homework, it would have worked.  (Yes, yes, I could revise it.  Maybe some day I will.)


But I think the biggest way my ISFJness informs my writing is in how I deal with characters.  I've written before about how I only really love a story if I want to be friends with the characters.  It's my deal breaker -- a movie can be beautiful, a book can be brilliant, a TV show can be hilarious, but if I don't love those characters and want to just hang out with them (in their world or mine, doesn't matter), I'm not going to love it.  Well, obviously I'm not going to write a whole story or novel about characters I don't love, right?

Actually, my first novel had an unlikable protagonist.  I didn't like her, most people in the book didn't like her -- that book definitely taught me not to make that mistake again!  That stinking book took me two years to finish, and I haven't looked at it since.  Got it out of my way, moved on, learned from that experience for sure ;-)

The trouble is, because I love my characters, and because I'm an ISFJ "protector" or "defender," I have a super hard time letting any of them get hurt.  But I write westerns and war stories.  Lots of action and danger and excitement.  People get hurt.  Sometimes they die.  Not as often as they might need to, I must admit -- I regularly plan on characters dying in stories, only to pardon them when it comes right down to it.  Even villains and antagonists!  I can think of four separate instances where I've let the Bad Guy live at the end when I really meant for him not to.  In the novel I'm rewriting right now, two characters were absolutely supposed to die at the end, and do they?  Nope, not a bit.  One other character does have to die for the story to work right, and I've been crying actual tears over having to rewrite his death scene and go through all that again.  Ugh.  Hates it, precious.  And he's a completely minor character! 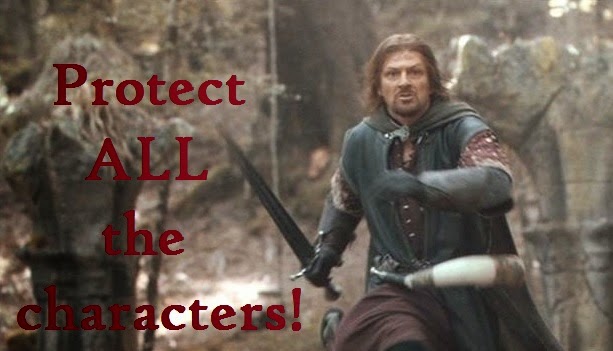 Now that I know all these things about myself, I do have an easier time writing.  I know I can't jump around in the story if I want it to make sense for me.  I know I need to finish my research before I start writing.  I know I'm going to have to be very hard-hearted indeed when it comes to killing characters for the sake of the story.
Posted by Hamlette (Rachel) at 12:43 PM