Three days ago, I had never heard of this movie.  Two days ago, I read The Millie's review here on her ever-amusing blog, Classic Forever, and watched the movie on YouTube that same day.  Her review is brilliant, and I strongly urge you to go read it.  Especially if you've never visited her blog, which is a unique delight.  Because her review is so awesome, I'm going to be very brief here, and if you want more details, you can read her post.  It's actually funnier than the movie itself. 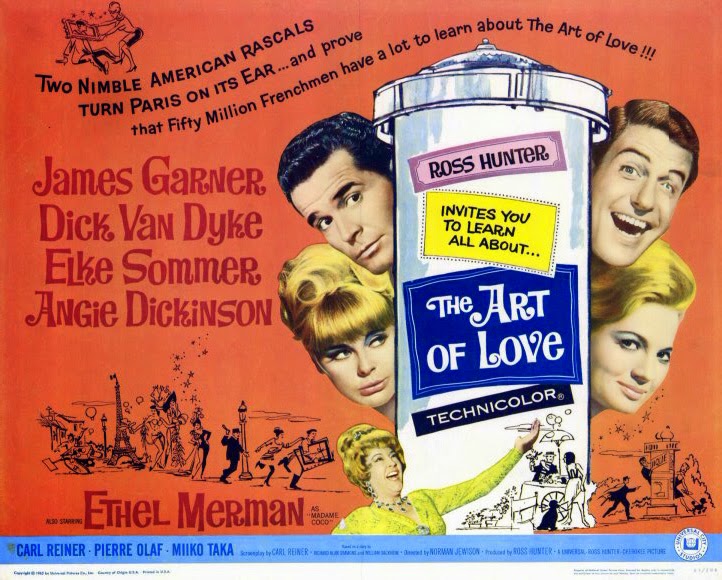 I've seen many, many wacky '60s comedies.  I've seen far more truly outrageous and bizarre movies than might be healthy -- my best friend/college roommate has a penchant for off-beat, absurd movies, the wackier, the better.  But The Art of Love ranks among the very looniest movies I have ever seen and liked.  Because, despite the fact that this movie was a crazed mixture of silliness and nonsense, it's also quite funny, and I would not be surprised if I watched it again some time.

Okay, so it's about two Americans in Paris, starving artist Paul (Dick Van Dyke, fresh from Mary Poppins) and charming mooch Casey (the dearly departed James Garner).  Casey thinks Paul commits suicide, starts making lots of money off Paul's paintings, which sell very well once Paul is "dead."  Paul's fiancee (Angie Dickinson) arrives from America, and she and Casey fall for each other. But Paul is not dead, as Casey knows by the time the fiancee arrives, and when Paul finds out Casey has stolen his girl, he does the only logical thing he can do.

He frames Casey for his murder.

Um, yes.  Dick Van Dyke frames James Garner for murder because James Garner just stole Angie Dickinson from him.  And if that doesn't make you want to watch this movie, then you probably wouldn't enjoy it anyway.

Still, if the thought of a maniacal Dick Van Dyke pitted against a whimpering James Garner makes you chuckle, you'd probably get a kick out of this wacky romp.

Is this movie family-friendly?  Somewhat.  There're a couple of instances of artists painting using nude models, but the nudity is implied.  There's a nightclub with dancers clothed in basically swimming suits, there are mentions of someone being a "dirty old man."  There are some passionate-for-the-'60s kisses.  There may have been a mild curse word or two, but I can't recall any for sure.
Posted by Hamlette (Rachel) at 10:22 AM