I had to wait to finalize this list until I'd seen Monuments Men a second time, to know whether or not it really belonged on this list.  It does.  I've seen most of these many times, some of them more than twenty.  The only other exception is Defiance, which I've also only seen twice, but which is so phenomenal I must love it.

You'll notice a lot of patterns here.  Lots of WWII movies.  Lots of big ensemble casts.  Lots of true stories.  Lots of John Wayne, though interestingly, he's not in either of my top 2 movies.  Those both feature Steve McQueen and James Coburn.  Hmm.  Anyway, most of these are also from the '50s and '60s, when war movies were still about heroes.  In the '70s, war movies got cynical, and I find them depressing. 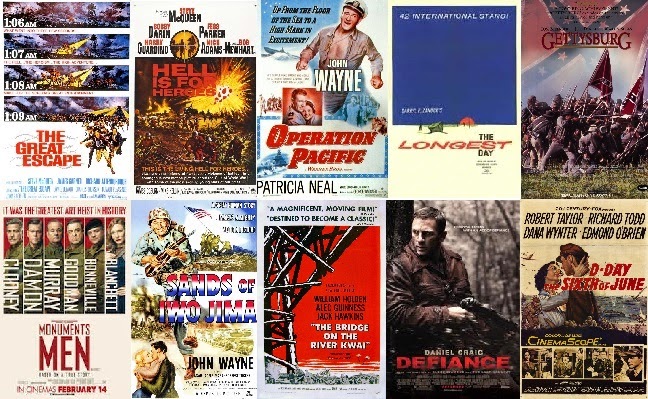 The Nazis brilliantly put all their worst eggs (Steve McQueen, James Coburn, Charles Bronson, James Garner...) in one prison camp, and naturally all those escape artists work together to escape.  I love this on so many levels, from the whole band-of-misfits-working-together angle to the clever planning to the actual escape itself.  And it's based on a true story!

One small American squad (Bobby Darin, Steve McQueen, Fess Parker, James Coburn, Bob Newhart...) holds off a Nazi attack thanks to lots of clever ruses and some spectacular sacrifices.  This was written by Robert Pirosh, who also created my beloved Combat!, and this whole movie almost feels like a long episode of the show.  Lots of human interest, some great humor, heroics, and my dearest Bobby Darin.  LOVE!

Commander Duke Gifford (John Wayne) leads a submarine crew on a bunch of adventures (most of them based on actual WWII events) and tries to win back his ex-wife (Patricia Neal).  My 6-year-old son asks to watch this at least once a month right now.  This is a clean and lovely movie.

The story of the D-Day invasion, told from many viewpoints, with one of the most impressive casts ever assembled:  John Wayne, Richard Burton, Robert Mitchum, Henry Fonda, Sal Mineo, Richard Todd, and a very young Sean Connery, to name a very few.  Until we had kids and lost our big chunks of movie-watching time, Cowboy and I used to watch this together every D-Day.

Another talented ensemble cast shows many of the events leading up to and during the turning point of the American Civil War.  Jeff Daniels turns in a wonderful performance as Col. Joshua Lawrence Chamberalain, one of my personal heroes.

Sgt. Stryker (John Wayne) takes a group of Marines from boot camp to the battle of Iwo Jima.  This is one of John Wayne's sadder, more multi-faceted characters.

A bunch of Allied POWs (including William Holden and Alec Guinness) build a bridge for their Japanese captors, then try to blow it up.  A fascinating study in morale and endurance.  And a true story.

Three Jewish brothers (Daniel Craig, Liev Schreiber, Jamie Bell) in Nazi-occupied Poland help lots of other Jews hide out in the Belarussian forest.  Gets grim and intense, but so, so good.  And guess what?  Another true story!

A woman who's engaged to a British officer (Richard Todd) falls in love with an American officer (Robert Taylor), and both men end up storming the Normandy beaches together.  Personally, I think anyone who ditches Richard Todd for Robert Taylor is an idiot.
Posted by Hamlette (Rachel) at 6:41 PM