"A Study in Sherlock" ed. by Laurie R. King and Leslie Klinger 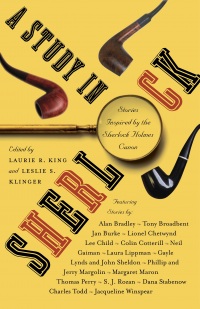 I got this book for Christmas and read it over the course of a couple weeks, limiting myself to a story every day or two to make it last longer.  I'm choosing it as the subject of my first review here because, although I finished reading it almost three months ago, it's directly informed my reading selections since then, which I'll be blogging about too, so I figured starting with the source would be a good idea.

I've been a fan of Sherlock Holmes since I was ten or eleven, when I found a giant, hardcover copy of The Hound of the Baskervilles at the library and devoured it over the weekend.  I can still remember the illustration on its cover, a giant black dog rushing toward the viewer, indistinct people in the background giving chase.  I've been a fan of Laurie R. King and her Sherlock Holmes/Mary Russell mysteries since around 2005, when I first read her brilliant The Beekeeper's Apprentice.  I had the pleasure of attending a reading she did in Connecticut a few years ago, even getting to meet her and ask her to sign a couple books.  So when I learned about this new book from her Facebook page, I was eager to read it.  And I haven't been disappointed!  All the stories were enjoyable, but I liked five of them particularly well, and these are they:

"The Men with the Twisted Lips" by S. J. Rozan.  This story has a collection of Oriental black market businessmen colluding to arrange for Sherlock Holmes to have all the clues he needs to solve the mystery told in the canonical story "The Man with the Twisted Lip."  It's full of vivid details and clever arrangements of little plot details to make the whole story work with the original.

"The Case of Death and Honey" by Neil Gaiman.  This one's a bit dark and very literary. by which I mean it's not particularly a mystery, but more of a character study.  Holmes pops up in a remote Chinese mountain range to practice some highly unusual beekeeping, with startling results.

"The Adventure of the Concert Pianist" by Margaret Maron.  This story follows Dr. Watson as he returns to Baker Street during the period after the Reichenbach Falls incident, when everyone assumes Holmes is dead. Watson helps their erstwhile housekeeper, Mrs. Hudson, solve a mystery concerning one of her relatives.  The very end makes me grin and say, "Awwww!" when I think of it.

"The Imitator" by Jan Burke.  This one has a bunch of post-WWI eccentrics using Holmes' methods to solve a kidnapping.  Lots of fun!

"The Startling Events in the Electrified City" by Thomas Perry.  Totally my favorite story in this book.  It posits that the assassination of President McKinley was in fact a most elaborate hoax concocted by the President himself and carried out with the help of Holmes and Watson.  I loved this story and have read it twice.  In my occasionally humble opinion, this story is worth the price of the whole book all by itself.

Reading this collection has inspired me to try out some new authors, and I'll be reviewing things by them soon, as I've read 4 or 5 books since this one, a couple of them by authors I've mentioned here.  And I'm on the hunt for more!
Posted by Hamlette (Rachel) at 5:07 PM