"For Whom the Bell Tolls" by Ernest Hemingway 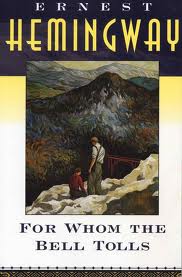 I've been a fan of Ernest Hemingway's writing for a decade now -- I actually first decided to read something by him because I went through a phase where I loved the movie City of Angels (1998).  Nicolas Cage's character recommends Hemingway to Meg Ryan's character because of how well he writes about food, and leaves A Moveable Feast on her nightstand.  The library didn't have that book, but they had The Sun Also Rises, and I picked that one because of the quote from Ecclesiastes at the beginning.  Ecclesiastes just happens to be one of my favorite books of the Bible, you see.  Anyway, I liked Hemingway's economical writing, and over the years, I've read all his short stories and several of his other novels.  But I'd never read For Whom the Bell Tolls, which is my brother's favorite Hemingway book (mine so far is A Moveable Feast).  So I decided it was high time to read it.

So I read it.  But I didn't like it much.  (Sorry, Johnnycake!)  In fact, I'd have to say it is my second-least-favorite Hemingway work.  (My least favorite is the unfinished Garden of Eden.)

It was just so bleak!  Unmitigatedly bleak.  There's an old joke I read in a Reader's Digest years ago about how different famous authors would answer the question of "Why did the chicken cross the road?"  I don't remember any of them anymore except the one for Hemingway, which was:  "To die.  In the rain.  Alone."  And I always kind of laughed about that, because for me, most of Hemingway isn't all that depressing.  Sure, a lot of his stories end sadly, in a sort of inevitable way, but none of the other things I've read by him have pounded Sadness!  Despair!  Pointless Death!  into the ground like this does.

If you have no idea what it's about, here's a quick recap:  An American volunteer named Robert Jordan, a volunteer in the Spanish republican army during the Spanish Civil War, gets sent to join this guerrilla band and blow up a bridge with their help.  He falls in love with a young girl named Maria, who was orphaned and raped by the opposing forces earlier in the war.  All the characters spend the whole time talking about how doomed the mission is and how they're all going to die.  And then most of them do die.  And not in a glorious, cathartic, serves-some-greater-purpose way like all the characters in Hamlet dying at the end.  Just in a bleak, pointless, inevitable-yet-preventable way.

Obviously, the point is that war is pointless and bleak and horrid.  I get that.  I just don't like the book.  Like I said the other day, I have to want to be friends with at least one character in a book (or movie, or TV show) to like it, and I didn't really want to be friends with anyone in this book.  I liked Pilar okay, the other female character, but not that much either.  So I spend the last half of the book thinking, "Oh, man, will this ever end?  I'm so tired of reading this!"  Because it was Hemingway, I did at least enjoy the writing, but not enough to make me like the book.
Posted by Hamlette (Rachel) at 5:35 PM