As I mentioned earlier, reading A Study in Sherlock inspired me to try out some new mystery authors.  I started with Jan Burke.  Our local library has several of her books, but not the first one in her series about Irene Kelly, so I just grabbed the one with the most interesting title.  It was Bloodlines. 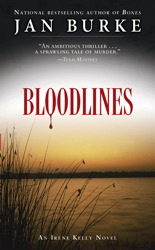 Bloodlines is the sort of sprawling, nuanced, intricately rambling treat I don't usually find when I read mysteries.  By the time I was fifty pages into it, I was firm friends with the two main characters of the first section, young Connor O'Connor and his mentor, newspaperman Jack Corrigan.  I need to blog about how important it is for me to become friends with characters sometime, but for now I'll just assure you that it's important.  And the faster I make friends, the better I generally like the book.  I love this book.  It takes place over five different decades, and about halfway through I realized it was kind of tying together several events in other books in the series.  Characters I grew to love would abruptly die off-page.  I grew to love other characters in their places.  The giant, seemingly rambly narrative came into focus, then charged ahead full-steam suddenly, then tied up in a most satisfactory -- but deliciously unexpected -- way.  Complete love!

It concerned a bunch of characters who died and disappeared in the 1950s in a way that made me think of Frank Miller's Sin City graphic novels.  Also, there's a kidnapping.  And then nothing whatsoever happens with the case for decades, until someone unexpectedly unearths some new clues....  By the end, I was a confirmed Jan Burke fan and hungry for more. 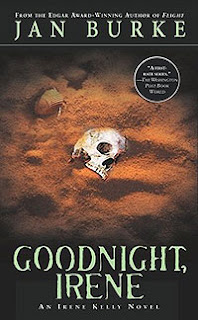 So I got Goodnight, Irene, the first book in this series.  And it was quite good too, with a lovely love story and a complicated plot.  I didn't love it as much as Bloodlines, but that's okay, because it was a much earlier novel, and now I know that they improve as they go along, rather than unimproving or staying the same.  In this one, Irene Kelly's best friend gets blown up, and she helps solve the murder while doing some nice journalistic work as well.  Did I mention Irene Kelly is a newspaper reporter too?  Anyway, a perfectly good mystery, if not as delightful as Bloodlines.  Can't wait to read more!
Posted by Hamlette (Rachel) at 7:39 PM

Email ThisBlogThis!Share to TwitterShare to FacebookShare to Pinterest
Labels: books