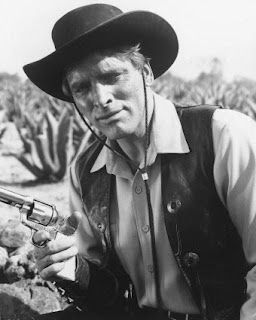 But for most of my 29 years, I haven't liked him. I haven't hated him -- I haven't avoided his movies, or at least not often. I just thought he was boring. Vanilla. White bread. Bland and uninteresting. Granted, I'd only seen him in a couple movies, like Gunfight at the O.K. Corral and From Here to Eternity, but he was pretty dull in them, so I didn't bother looking for more.

Then DKoren told me last year that one of her all-time favorite movies is The Professionals, which stars Lancaster and Lee Marvin and is a fun western romp. A few months later, I was at my parents' house and discovered that my dad had two copies of The Professionals. Sometimes that happens to him, because he can't always remember if he has a movie or not. When Johnnycake and I were home, he'd always ask us before buying a new movie, and we could tell him if he had it or not. But now we're gone, so sometimes he finds a movie he thinks looks good, buys it, and then I come to visit and discover he's got two copies of it. Anyway, Dad gave me one of his copies, and I watched it sometime during the winter. 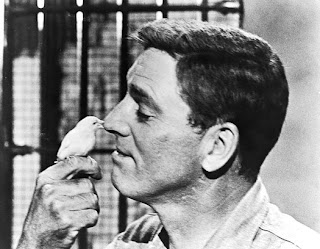 And Burt Lancaster wasn't boring in it! He was sarcastic and sly and sexy, with a twinkle in his eye and a trick up his sleeve.

So I decided maybe I'd have to give him a second chance. But, my life being what it is, I didn't get around to watching one of his movies until this week. I saw Birdman of Alcatraz. And I loved it. And I loved Burt Lancaster. He was subtle, he was angry, he was loud, he was quiet, he was just plain cool. And did I mention he has the broadest pair of shoulders I've seen on a man since, oh, David Boreanaz?
Posted by Hamlette (Rachel) at 8:28 PM