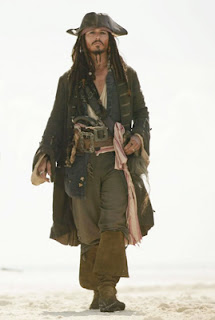 So, you're probably wondering why I haven't posted anything about Pirates of the Caribbean: At World's End yet, since I'm such a pirate fiend and all. Well, I saw it on opening night, May 25, and liked it. Better than Dead Man's Chest, but not as good as Curse of the Black Pearl. It left me in a much different mood than did the other two, however. When I left the theater after seeing the first two, I was totally pumped. Ready to do a little buckling and swashing myself. After I saw At World's End, I was sort of quiet and contemplative. But I thought it might have been because I had to head straight to my icky job from the theater, and that was enough of a downer to kill my mood. So I wanted to wait to blog about it until I'd seen it again, and was planning to go see it the following Tuesday with ED. But that fell through.

So I went to see it tonight with Cowboy. And I agree with my first assessment, that it's funnier and better than the second, but not as good as the first. But I ended up in the exact same contemplative mood at the end, so I guess that's how this one leaves me. 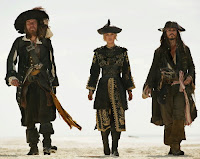 Anyway, Johnny was much less silly this time around, back to being seriously funny. Loved Keith Richards' appearance, wish he had more scenes. And I think my hands-down favorite part is when Barbossa, Elizabeth, and Jack meet up with Will, Davy, and the evil East India Co. dude to have a parley. They land on opposite ends of this sand spit thingie and the music goes all Ennio Morricone (think A Fistful of Dollars), and they do the slow-mo swagger-toward-each-other thing. Love it. 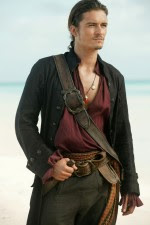 And once again, Johnny Depp was the hottest, but Orlando Bloom got more studly even than the last one -- and I'm not really an Orli fan! But starting with the aforementioned parley showdown, he just got cool. Like he finally figured out how to walk in his boots or something. The little earring helped too.

Anyway, it got two Warheads because it got a little slow in the middle and I actually unwrapped a second piece of candy. So not magnificent, but not shabby either.
Posted by Rachel Kovaciny at 4:24 AM