Due to popular demand, here is my AAR on the Atlanta Fanfic Recon '06! It seems I have lurkers after all ;-) How cool! (Oh yeah, AAR means After Action Review...)

Friday, September 22
I arrived in Atlanta feeling very losted and scared. What if no one else showed up? What if we didn't get along after all? What if DKoren's plane crashed and I was bereft of a bestest friend and left to my own devices all weekend? I picked up my little green suitcase at Baggage Claim South (I think), then started looking for the Delta carousels, because I knew that's what DKoren was flying. And there weren't any. No carousels for Delta (oooh -- cool title!). I began to panic.

Then I raised my tear-filled eyes and saw that waaaaay over yonder was Baggage Claim North, all Delta all the time. I hustled over there, heart pounding and nose running (I hate the aftereffects of colds!), and there, beside a shiny silver fence, stood DKoren! And some people that I had never seen before in my life... but who were all wearing something C!-ish. DKoren turned around and saw me and grinned and... I gotta tell you, she may only weigh 37 pounds, but she about knocked me over with her hug.

Eventually other people joined up with us, and we comandeered a bus to take us out to the parking garage. Then began the great Clown Maneuver. These people were seriously convinced you were going to get 9 people, 18 suitcases, and a guitar into that van. DKoren and I had far too much fun watching the van sink lower and lower and lower as they crammed into that thing -- I'm glad we stayed behind for the second wave, because those tires were seriously bulging. The seven of them headed off for the hotel, and DKoren and I caught the bus back to the airport. We had a nice lunch and met up with a the stragglers. Then it was off to the hotel for us, where I got to meet the rest of the bunch, including our intrepid Third Musketeer, Jambi :-D She was sharing a room with DKoren and I all weekend. After supper, the twelve of us congregated in the ever-popular Medic's Foxhole and I got introduced to megas! They DO exist! (Megas are these ginormous M&Ms that I could never seem to find).

Saturday, September 23
I didn't think I was going to sleep very well that night, what with trying to switch over from night shift and being all excited about finally being at Recon, but I actually managed 6 hours of snoozing, I think. Good thing, because Saturday was chock full of wonderful fun that required every ounce of my energy.

First off, we went to an American Legion hall outside Atlanta and got a chance to interact with actual WWII weapons... and you know me and my love of weaponry! I got to handle a German Mauser rifle, an M1 Garand and M1 Carbine, several Lugers and .45, and a Thompson submachine gun!!!! My Combat! hero, Sgt. Saunders, carries a Thompson, so that was a very special event for me. We got to try on WWII helmets and jackets too, and get our pictures taken. The Carbine was lighter than I'd expected, the Mauser and Garand were heavier than I thought they might be, but that Thompson? Honestly, it felt just the way I'd always imagined. The weight, the balance... it was like I'd been handling one for the last ten years. Made my little heart glow. 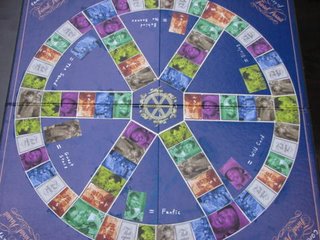 After lunch, Belle arrived, even though we'd about given up on her -- poor thing, driving in all that rain! So we played Combat! Trivial Pursuit, which DKoren and I made up!!! Everyone had a blast, and I got about a million compliments for the playing board, which I made all C!-ish.

CCK is everyone's hero for providing tasty pizza for our supper Saturday night! And I think we even managed not to leave tooooo many greasy fingerprints on each others' fanzines as we signed them! Oh yeah, we created a fanzine that came out at the same time as Recon. It has 347 pages and 16 fanfic stories, including one co-written by DKoren and I. If you're interested, here's a link to a little more info.

Sunday, September 24
A whole bunch of us got interviewed about our love of Combat! for a possible Veteran's Day Marathon of eps on the American Goodlife tv network (I think it might have a new name now, tho... can't remember for sure). That was pretty scary, but we knew the questions in advance and were all there to provide (silent-ish) moral support during the taping :-D

Sunday was a sad day, though, because several people left. I hate goodbyes. But we managed to have lots of fun on Sunday night during our extreeeeeeeemely long supper.

Monday, September 25
Then it was Monday all of a sudden, and I was sitting in the (empty) bathtub writing in my journal about how sad I was that it was all ending so soon. We definitely need to extend the next Recon -- arrive on Thursday and leave on Monday? Yes, we're planning on doing this next year, possibly in Vegas, baby!

Although I managed to get myself slightly losted at the airport, my squaddies found me after a brief handy-talky conversation, and we began the sad business of parting. I was so loath to leave, I almost missed my plane! Good thing DKoren had my back :-)

I'm a very shy person. I don't like meeting strangers very well -- but these Combat! fanfic friends I'd made online were all just as wonderful in real life as they were on the internet, and I cemented a lot of friendships that weekend. In fact, I just had a little reunion with one of them this past weekend, a mini-recon near home here that was tons of fun! And I truly can't wait for Recon '07, wherever it may be!
Posted by Rachel Kovaciny at 8:03 AM