I have decided that maybe having Viggo Mortensen play Aragorn is okay after all. This is thanks to Noumenon's comment that in The Lion, the Witch, and the Wardrobe, Peter "gets to be the king and general just cause he's the oldest and prettiest male." 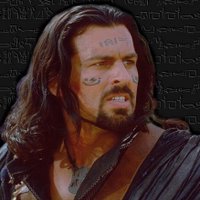 He's just so bloody lovely in the two Mummy movies, and obviously can do the whole horse-riding, sword-fighting, army-leading thing quite nicely. Plus, he looks great with the long hair, he can pull of the scruffy thing...so ever since opening night of Fellowship of the Ring back in 2001, I've disliked Viggo Mortensen as Aragorn and wished they'd cast Oded Fehr instead.

But Noumenon has a point. If Fehr had played Aragorn, there would be a tendency to believe he gets to be king in the end because he's just so bloody lovely. Which would kind of cheapen the character in a way, letting people focus on his hottiness 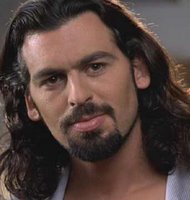 instead of on his sterling character qualities (like what happens with Orli playing Legolas, you know?).

Plus, if I had Oded Fehr to watch, I might be tempted to tear my gaze away from my dearest Boromir, which would be tragic. Sean Bean's had to share me with Harrison Ford and Pierce Brosnan already, so it's about time he plays someone I can give my undivided attention to.

I still wish Viggo Mortensen had a better shouting voice, though. And that Aragorn didn't wear pajamas to councils of war.
Posted by Rachel Kovaciny at 10:14 PM

Email ThisBlogThis!Share to TwitterShare to FacebookShare to Pinterest
Labels: Lord of the Rings, movies, Tolkien