Ohmygiddyaunt! I finally finished my latest piece of Combat! fanfiction, "Dying Like Men". The webmasters of the Purple Hearts site are too busy with Christmas busy-ness to post it there right away, but I'd been writing this story since January and a lot of other fanfic writers were clamoring to read it. So I uploaded it to our Yahoo group page, where we put temporary copies of stories until we can get them on a real page. I'll let you know just as soon as it's posted for the whole world to read (if you simply can't wait, email me and I'll consider sending you your own copy as an attachment).

I have never before gotten reactions like this to one of my stories. Bayonet, one of the other fanfic writers that I admire the most (actually, she started the Purple Hearts page), wrote me this long letter of praise for the story. She said that if I wrote a story that had no one but Littlejohn in it, she would read it. 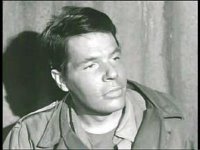 Let me explain what makes this compliment so wonderful that it made tears well up in my eyes. Littlejohn is a very minor character in Combat!. Most fanfic stories are about the whole squad, or at least several members of it. If they're about a single member of the squad, they're generally about Lt. Hanley or Sgt. Saunders. Or sometimes Kirby or Caje, the other two main favorites. There are a few pieces that focus on Doc and Billy. I don't think I've ever read a story about only Littlejohn. His character never got very well explored in the series, and he's mostly just kind of there, being useful for whatever plot device comes along. In fanfic, Littlejohn generally gets relegated into a sort of clumsy buffoon role, which I firmly dislike. In the series, he could be clumsy, he had some marvelous humorous moments (especially in scenes where he was the 'Older and Wiser Soldier' playing off Billy's 'Naive and Disingenuous Youngster'), but he was never a buffoon. 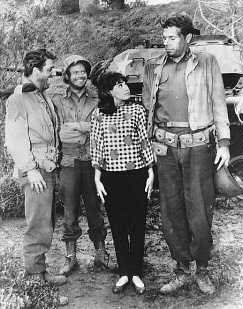 So I decided to write "Dying Like Men" as if it was an episode shot over Littlejohn's shoulder. It's got all the other main characters in it, but it's from Littlejohn's perspective. We get to hear his thoughts and observations above all the rest of the stuff. I wanted to show him to be the intelligent, insightful character I've always thought him to be. It seems I've succeeded. Wow. That's a pretty doggoned cool feeling: succeeding in getting readers to feel the way you do about something.

(In other words, for those of you that haven't seen much/any of Combat!, writing a whole story from Littlejohn's perspective is like doing a story focusing on Riley of Buffy the Vampire Slayer or Sulu of Star Trek.)
Posted by Rachel Kovaciny at 11:02 AM