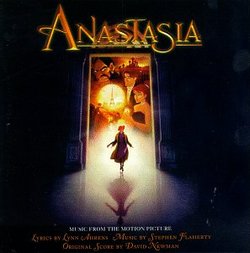 I have owned this soundtrack since I was in college. I first saw Anastasia (1997) on Thanksgiving break during my freshman year of college, and I loved it so much, I bought the soundtrack when I was home for Christmas. Anastasia is hardly the stuff historical documentaries are made of, but if you're like me and don't expect your animated movies to be exactly factual, then you can enjoy it for the history-inspired fable it clearly is. The music by David Newman, Lynn Ahrens, and Stephen Flaherty, was nominated for two Academy Awards, though it didn't win either of them.
The first song in both the movie and the soundtrack is "A Rumor in St. Petersburg," and it's so much fun -- it reminds me of the song "The Rumor" from Fiddler on the Roof, as I'm sure it's meant to. After all, both movies are set in Russia in the early part of the 1900s. The song works splendidly to communicate not just the setting, but also tell us the basic plot: two con artists (voiced by John Cusack and Kelsey Grammer) are searching for a girl to impersonate the missing Princess Anastasia to get them a big reward from her grandmother.
Meanwhile, an orphan named Anya (Meg Ryan) with no memory of her past sets off to figure out who she used to be, as the song "Journey to the Past" explores. The music helps us feel the mixture of determination and hesitancy she feels about trying to find out her history. The music swells as her questions give way to optimistic ideas of what she might find on this journey. This was nominated for the Oscar for Best Song, but of course it lost out to a little tune called "My Heart Will Go On." Sigh.
My third selection to share today is "Once Upon a December." I think this is the most beautiful song in the whole score, and the one that best captures the mystery and yearning that run through this film. In it, Anastasia regains a memory of dancing with her father in the palace as a child. It's haunting, isn't it?
Usually I limit myself to three tracks for these reviews, but today I'm sharing one more song. "At the Beginning" plays during the end credits, sung by Donna Lewis and Richard Marx.  It's my favorite song on the whole album. This song gives me a happy energy high, and I could listen to it over and over. In fact, I often have :-) My favorite part is at 2:25. My college roommates and I used to belt this song together -- we were all singers, and although we had wildly different musical tastes, we all loved this soundtrack and this song.  Ahh, such good memories <3
Dasvidaniya!  (Which doesn't mean "farewell" the way Rasputin claims in one of his songs, but is more like "until we meet again," just fyi...)
(This review originally appeared here at J and J Productions on November 18, 2015.)
Posted by Hamlette (Rachel) at 9:32 PM