I, Hamlette, love westerns. You probably know that by now, since I just finished co-hosting Legends of Western Cinema Week for the... fourth year?  Something like that. 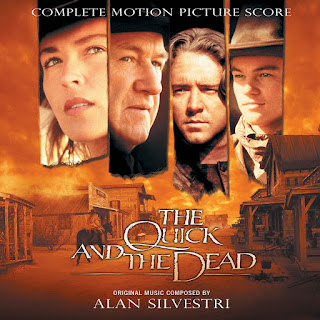 I feel like The Quick and the Dead (1995) is not an especially well-known movie, so I'll quick recap what it's about: An unknown female gunslinger (Sharon Stone) enters a gunfighting competition on a quest to avenge her father's death. It is a leeeeeetle bit cheesy here and there, but that's more than made up for by the presence of Russell Crowe as a killer turned pacifistic preacher, and of Gene Hackman as the powerful man who runs the town and knows everyone's secrets. There's also a young Leonardo DiCaprio, and Gary Sinise is in a flashback scene. Good cast, good music, satisfying story. It's rated R, though, so watch with caution, as there are some skippable things.
But you don't need any caution when listening to the soundtrack by Alan Silvestri! Here are a few tracks to give you an idea of what the soundtrack as a whole is like.
"Redemption" has such a classic western sound to it, with the whistling, the whip-cracks, and lots of guitar. Really captures the exciting-but-sometimes-dark-and-pensive tone for the movie.
"The Big Day" starts off all edgy and off-kilter, upping the tension handily. It builds slowly, finally reaching a moody climax that conveys more sorrow than triumph.
Back to that main theme again that you heard in "Redemption," only this time it's presented with a clear and determined trumpet instead of whistling. Then, because this is played during the end credits and composers like to do this, it pulls in other themes from throughout the score, so that this one track is kind of a nice overview of the major themes.  In fact, it might be my favorite track on the whole album!
Silvestri's score for The Quick and the Dead is one of my favorites to write to, especially if I'm writing action scenes or gunfights.  But it's also great when I need a little burst of energy while cooking or doing housework.
(Most of this review originally appeared here at J and J Productions on October 22, 2015.)
Posted by Hamlette (Rachel) at 7:56 PM