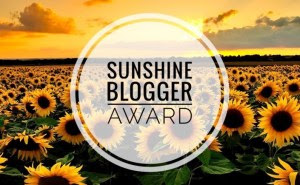 The Classic Movie Muse has awarded me the Sunshine Blogger Award :-)  This is always such a fun one, and I'm excited to answer her questions.  But first, the rules:

Now, time for the fun stuff.  Thanks for these intriguing questions, CMM!

1. You are able to travel back in time and are starring in a film from Hollywood’s Golden Age -- which decade would you prefer and why?

I would obviously choose the 1950s because I could make a classic western with John Wayne and Alan Ladd and Maureen O'Hara.  Clearly, if I had the power to travel back in time, I would also have the power to make some kind of deal with their studios so they could work together.  While I'm at it, I'll just go ahead and write the screenplay too so I can make sure that we all get wonderful lines and heroic roles, and I get good dramatic scenes with all three of them.  But we'll also have some funny scenes because they were so good at comedy, but John Wayne and Alan Ladd almost never got to do any.

Maureen and I would play best friends, and Duke and Alan would play best friends, and we would all fall in love at the same time (well, I mean, me with Alan, and Maureen with Duke), while also battling some kind of sinister bad guy (probably played by Lee Marvin, with Vic Morrow as a sidekick) who is trying to con Maureen and I into investing our family fortunes in a non-existent gold mine.  With at least one shoot-out that we ladies get to participate in too.  Make it so!

2. What is your favorite film related book?

I love and adore The Complete Films of John Wayne by Mark Ricci, Steven Zmijewsky, and Boris Zmijewsky -- I bought a copy when we visited John Wayne's birthplace when I was a teen, and it was one of the select books I took to college with me.  Just paging through it would calm me down when I would get all stressed out about papers and projects and tests.  Now I have two copies because my friend Olivia found me a newer edition that's not falling to pieces :-)  So that's the one I consult now.  But I have to keep the old one too, because it is full of memories.

Then there's The Films of Alan Ladd by Marilyn Henry and Ron DeSourdis, a much more recent acquisition.  I have this rule that I do my best not to read or learn anything about one of Alan's movies before I watch it so I can go in with no preconceived ideas.  But as soon as I do watch one I hadn't seen before, I look it up in this book and read their analysis of it, which I generally agree with.

And I owe much of my movie-related knowledge to The Film Lover's Companion, edited by David Quinlan.  When I was a movie-obsessed teen in the '90s, I didn't have the internet, and even if I did, I'm not sure if imdb.com existed yet.  So I had this book.  When I saw a movie and liked an actor in it, I looked them up in this book to get a brief bio and a list of their other movies.  And if I saw an actor in a movie and thought, "Hey, I think I saw them in such-and-such movie too!" I could look and see if it was true.  It was incredibly helpful, and although I don't consult it that way anymore, I do still like paging back through it.

3. Do you own any pieces of memorabilia from classic Hollywood (autographs, magazines, etc.)?

Of course I do!  I have quite a few random magazines and advertisements featuring my favorite actors and actresses.  I have production stills and a couple of lobby cards.  Phyl sent me Alan Ladd and Veronica Lake paper dolls to color and cut out for Christmas a couple years ago.  I have a few autographed pictures -- none are terribly valuable, but they're important to me personally.  I have some vintage sheet music for movie themes, too, like "Mona Lisa" from Captain Carey, USA (1949).

4. What was the last classic movie you watched and would you recommend it?

I just watched The Saint Strikes Back (1939), the first Simon Templar movie starring George Sanders, and it was great fun!  I mean, it's only a B-movie detective story, and it's only like 65 minutes long, but it was just the sort of popcorn flick I needed.  I love the Saint books by Leslie Charteris, and I've wanted to see the George Sanders movies for the longest time, so I was excited to get a set of all five.

5. What is the post that you’re most proud of on your blog? Leave a link to share it with us!

I have never gotten tired of my fake review for a 1943 noir version of Hamlet I called Murder Most Foul.  I'm especially proud of the fact that some people actually thought it was real, until they got to the end where I confessed it wasn't.  It was incredibly fun to write, and I actually want to expand it into a novel some day because I think it worked quite well.

Wanna know something crazy?  I cast Alan Ladd as Hamlet in that three years BEFORE I fell in love with him.  I'd seen him in This Gun for Hire (1942) a few years earlier, and really thought he would make an effective Hamlet, so I just went with it.  I still think he would.

6. Is there a movie that has made an impact on your life? Whether it be through the viewing experience, the film’s message, etc.

Uh, yeah?  Like... dozens?  Hundreds?  I'm always learning things from movies, just like I do from books.  Ben-Hur (1959) taught me to choose my friends carefully, because who you hang out with will influence who you become, even when you're an adult.  Captain Newman, MD (1963) taught me that sometimes, all a person needs is someone who will listen to them.  Dead Again (1991) taught me to be very careful how I hand people a pair of scissors.   And I could go on and on and on.

7. Which film do you think should have won for Best Picture but didn’t?

8. Do you have a favorite film composer?

Absolutely!  Elmer Bernstein.  I'm particularly fond of his scores for The Sons of Katie Elder (1965) (listen here), The Magnificent Seven (1960) (listen here), and The Great Escape (1963) (listen here).  Since I'm reviving my blog series on movie soundtracks here, I'm sure I'll be talking about them in full eventually!  So for now I'll just say that I love how Bernstein writes actiony pieces that also manage to have a beautiful lyricism to them.  His scores underline what's going on in a scene, they don't try to hint at what's to come or tell the story themselves.  And yet, listening to them, you can hear the story happening.  Amazing.

9. What classic film would you recommend to someone who says they hate old movies?

That entirely depends on the person and their tastes in stories.  There's not a one-size-fits-all answer to that question.  Nobody enjoys every movie.  So if someone tells me they just can't get into old movies, but they'd like to try, I will ask about their favorite modern movies and suggest some classics that have similar themes, feels, storylines, characters, etc.

10. How do you approach movie watching? Do you have a method (i.e. going through filmographies) or watch whatever you’re in the mood for?

I am a mood watcher.  Unless I need to watch a specific movie to review for a blogging event, I will just go for whatever I'm in the mood for.  This is why I have an extensive DVD collection.

11. If you could give one piece of advice to new bloggers what would it be?

Get active in the blogging community!  Find blogs you enjoy, follow them, comment on them.  Make friends.  And do fun tags like this that help people get to know you, too.

Ahhh, those were such awesome questions :-)

And here are my questions for them:

Play if you want to!  (And if I didn't tag you, but you like these questions, tag yourself and answer them anyway!)