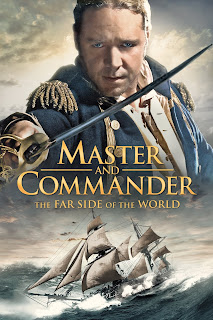 I can't watch this movie without grinning.  And by that, I mean grinning through about 90% of it, and clasping my hands in mute, loving anxiety for the other 10%.

I grin because I absolutely adore the two main characters, love four or five others, and am exceedingly fond of most of the rest.  Hence the anxiety whenever they're in Terrible Danger, which they are pretty often since this is a tale of daring deeds and derring-do on the high seas during the Napoleonic Wars.

I also grin because I've read all 20 of the books in the series this is based on, the Aubrey/Maturin novels by Patrick O'Brian, and the filmmakers captured them absolutely perfectly.  I'd actually read most/all of the books before this came out in 2003, and I remember taking my brother to see it on his first Thanksgiving break from college and just reveling in how exactly right they got every single thing.  Every character, every personality quirk, every nuance.  Completely and absolutely true to the books.  (He probably got really tired of me leaning over and whispering my glee at how perfectly they had captured yet another tiny detail.)

Well, everything except the plot, which actually cobbles together a series of adventures from several of the books.  People who read the book Master and Commander and then hear me say this is the most perfect book-to-movie adaptation I have ever seen... usually growl at me.  Because the plot doesn't come from that book, which is the first in the series.  A lot of it comes from a much later book in the series, The Far Side of the World.  Which is why the title includes that as well, but people seem to miss that?  I guess?  Whatever.  They absolutely, positively, indisputably captured the characters and the world and the essence of the series. 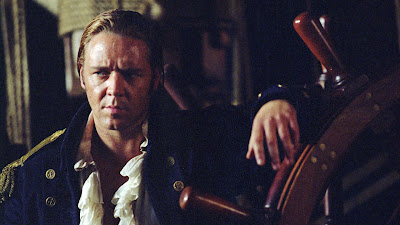 First of all, you have Russell Crowe playing Captain Jack Aubrey, a bulldog of a naval officer who unswervingly pursues his enemies in pursuit of... well, in pursuit of glory and riches as well as the good of the British Empire, it must be admitted.  That's what keeps him from being a one-note, cardboard cutout of a hero.  He's Lucky Jack, hero of many an engagement with long odds and high rewards.  But he's also very human and feels the loss of crewmembers keenly.  He's like a benevolent but steely-eyed father for everyone on his crew, basically. 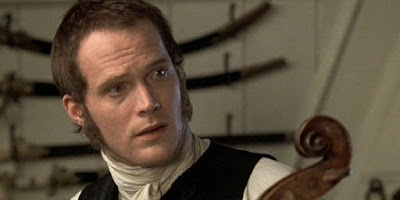 And then you have Paul Bettany playing his best friend in all the world, Dr. Stephen Maturin.  Stephen is a real physician who has been to real medical school, not a mere surgeon, aka some guy who knows how to sew up wounds and dig out bullets and amputate limbs.  (His role/rank aboard ship is technically Ships' Surgeon, though.)  This makes him something of a celebrity to the crew because if they get wounded, they get to be operated on a guy who has at least a reasonable chance of knowing how to put you back together properly and isn't just guessing.  He has a quick Irish temper and tends to try to play Jiminy Cricket to his friend Jack whenever he displays what Stephen considers to be dangerously high hubris.  Stephen is an amateur naturalist and also (though this doesn't play into the movie at all) often a spy for the British government. 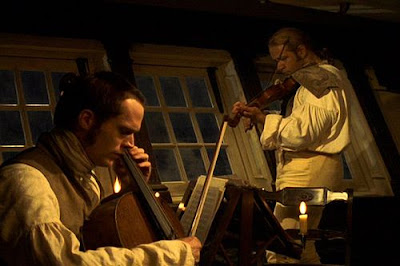 In the books, Jack and Stephen met at a concert in London, where they annoy each other so much, they end up almost fighting a duel over their differing ideas of how to enjoy fine music.  I wrote a Femnista article last year (read it here) about their meeting, it tickles me so much.  Anyway, it turns out that Stephen plays the cello and Jack plays the violin, and they spend their evenings aboard ship playing duets because they think it's fun.  And eating toasted cheese, because who doesn't like toasted cheese?  (Well, aside from my ridiculous 11-yr-old daughter...)  The movie has multiple scenes of them enjoying music together, and the soundtrack is just marvelous as a result.  Russell Crowe actually learned to play the violin just for this movie, and I assume Paul Bettany took some sort of cello lessons too, since they both look pretty credible.  I do know that Bettany learned how to use 1800s surgeon's tools so he'd look credible doing bits of surgery. 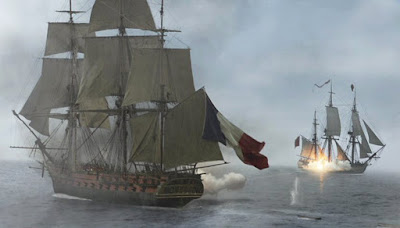 Anyway, the plot revolves around Aubrey's ship, the HMS Surprise, pursuing a French ship, the Acheron, which is trying to get around Cape Horn and into the Pacific Ocean so it can harass English ships there and disrupt their trading.  Along the way, various adventures occur.  Stephen gets to visit the Galapagos Islands, which delights him because he can collect lots of rare specimens there.  (They actually filmed most of that part on the Galapagos Islands, too!)  There are multiple naval battles, with lots of cannoneering and hand-to-hand fighting and tricky nautical maneuvering.  It's very thrilling and fun to watch, though my m-i-l found the battles really hard to follow when we watched this with her years ago, so your mileage may vary. 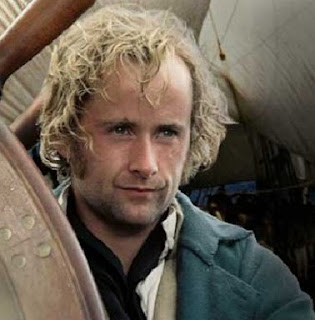 Besides Jack and Stephen, I also love Barrett Bonden (Billy Boyd), Lt. Tom Pullings (James D'Arcy), and Midshipman Blakeney (Max Pirkis).  And Jack's steward, Killick (David Threlfall), who's always grumpy and hates the music that Jack and Stephen play, and is so fiercely loyal to his captain that I want to hug him.  Plus, he's the one making the toasted cheese, and if you've ever had toasted cheese, well, you understand how that could make you love a guy. 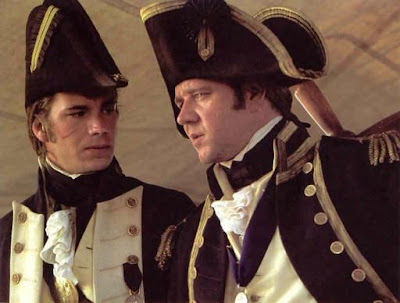 If you like the Horatio Hornblower movies or just love stories of heroic deeds done by ordinary people in extraordinary circumstances, definitely give this movie a try.

Is this movie family friendly?  Well, it's rated PG-13 for "intense battle sequences, related images, and brief language."  There's a LOT of violence because it IS a war movie.  Characters you care about get hurt.  Surgical things get not-entirely-graphically portrayed, such as an arm getting amputated just out of shot, or a guy getting his brain operated on.  And there's a very tense scene involving extracting a bullet from someone's abdomen.  The language is overall pretty mild, but there's one F-bomb.  There's a drowning and a suicide, and a pretty intense storm sequence.  I would say it's fine for older teens.  There's no innuendo or steamy scenes because there aren't any female characters at all, aside from a couple of native women briefly seen selling fruit and parrots from canoes.  They're all decently clad.

This has been my final contribution for the Epic Story Event hosted by Heidi at Along the Brandywine, which has been going for weeks now and ends today.  Nothing like squeaking in at the last minute with one last post, eh?