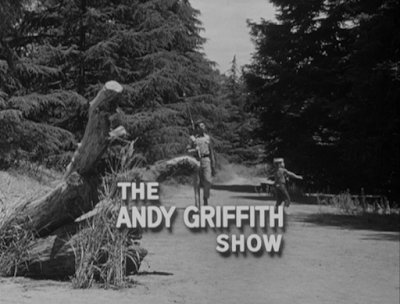 The first time my family saw this episode, back when I was in my early teens, we laughed so hard we had to keep pausing the VHS tape and rewinding it because we couldn't hear the dialog over our glee.  The last time I watched it with my family, a year or so ago, we had to keep pausing and rewinding our DVD because we were laughing so loudly, we couldn't hear the dialog.  And if you think I'm overselling the hilarity of this particular gem, you can watch it for free on Amazon Prime right now and decide for yourself -- it's episode 2 of season 4.  (My youngest was about 7 the first time she watched it and thought parts were too scary, so do be aware than young ones with a phobia of ghosts might find it worrisome.) 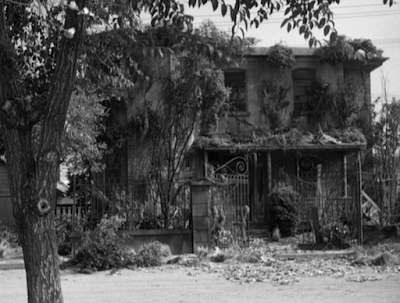 Every small town should have a haunted house, and Mayberry, NC, has the perfect specimen: the Old Rimshaw Place at the edge of town.

(Fun fact: this house was known as the "Aunt Pitty Pat House" since it was used as the exterior for that character's house in Gone with the Wind [1939], according to imdb.com.) 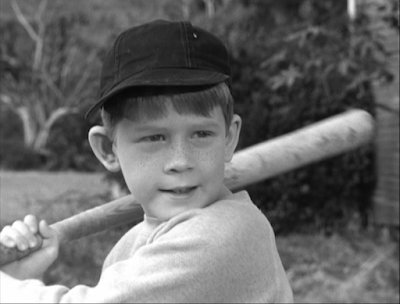 Little Opie Taylor (Ron Howard) and a pal are debating baseball heroes near it, so of course the inevitable happens:  Opie hits a ball right into the haunted house.  The boys only make it as far as the front porch before moans from inside the house send them skedaddling. 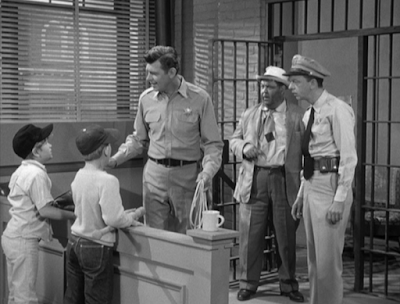 Opie is sure his pa will brave enough to rescue the lost baseball, since after all, he's Sheriff Andy Taylor (Andy Griffith).  Andy gives them a good scolding for messing around that old house because it's probably dangerous, loose floorboards and ceilings caved in and what-all.  He says he'll get his ball for them later, but not to go back themselves. 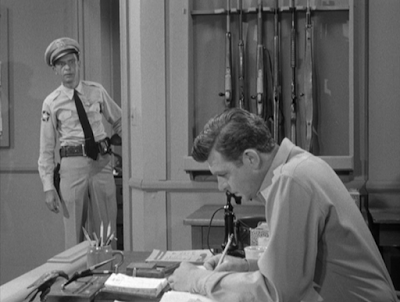 As you might expect, if you know this show and these characters, after the boys leave, Andy decides to have a little fun with his deputy, Barney Fife (Don Knotts). Barney has been telling Andy how he ought to make Opie and his pal go back to get the baseball themselves so they'd learn not to be afraid of empty houses, so Andy suggests that Barney go get it.  Very reluctantly, he goes, but the takes Gomer Pyle (Jim Nabors) along for moral support.  Which, naturally, results in no recovery of the baseball, and two adults acting more scared than the kids did. 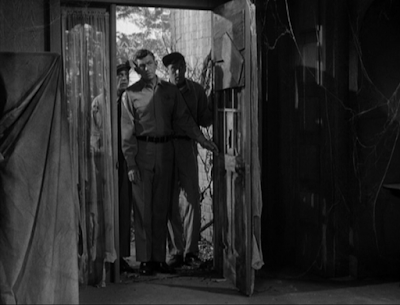 So Andy has to take both of them back to the Rimshaw Place to see if they can find Opie's baseball, which they do.  Only they find a whole lot more than that, and Andy ends up solving a local mystery.  But not before Barney and Gomer scare each other silly with stories of axe murders and revenge-seeking ghosts. 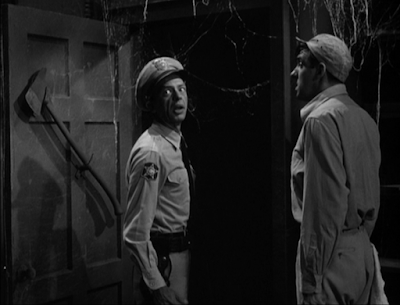 To this day, if someone asks me to go get something from the basement, I'm very likely to open the door, softly call, "Any old tramps down there?" then slam it and say, "Nothin' down there!" :-D

All's well that ends well, and Opie even gets his baseball back.

One of my favorite things about The Andy Griffith Show is how they show that small, everyday actions can have importance.  They might not seem big or exciting compared to things like saving the world from aliens or even fighting in a war, but to the people in those situations, they are important.  A lost baseball is worth taking time to retrieve.  Lawbreakers need to be brought to justice, even if they're not robbing banks or killing people.  And foolishness can be pointed out gently, not mocked and ridiculed in a rude way.

That's another thing I love about this show:  that so often, it teaches people to treat others with kindness even if they're weird or absurd or different from you.  A foolish deputy has friends who are careful never to tease him beyond what he can handle.  A little boy's fears get taken seriously.  The town drunk receives patience and understanding.  Is it idealistic?  Yes.  Is it an ideal we can strive for?  Absolutely. 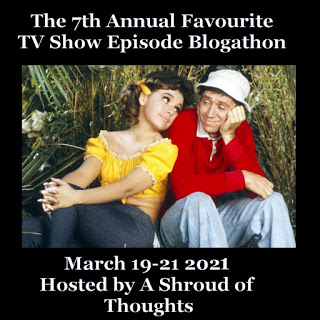 This has been my contribution to the 7th Annual Favourite TV Show Episode Blogathon hosted once again by A Shroud of Thoughts.  Click here to access the list of links to all the posts for this event!