I first saw Young at Heart (1954) on AMC about 20 years ago, back when AMC showed classic American movies.  I was in college, and I only caught the middle of the movie because I was just watching TV in the lounge between classes, and that's what happened to be on.  I came in around the time that Barney (Frank Sinatra) and Laurie (Doris Day) met and spent a lot of time verbally sparring, and I had to leave before the ending, but I liked what I saw, and so I kept an eye on the TV listings for it to come around again.
Eventually, it did, and I managed to record it with my VCR (I went to college in the dark ages, you know) and watch the whole thing.
Because I saw the middle part first, I tend to think of this as a movie about a couple who have a lot of sparky chemistry, but it's really more about how another person's faith in you is never going to make up for your own lack of confidence.
Laurie Tuttle is one of three daughters of a music professor.  All three daughters are intelligent, spirited, and musically talented.  One day, a friend of her dad's, Alex (Gig Young) comes over and causes a bit of a sensation -- he's not a classical musician like the Tuttles, he writes pop songs.  Alex is charming and funny and nice, and Laurie gets along well with him, so people start to assume they're an item.
But then, Barney arrives on the scene.  He's Alex's arranger, and he's everything Alex isn't -- quiet, morose, acerbic, and unsure of his own talent.  He's also basically the exact opposite of Laurie too, and she finds him an exciting challenge.  Laurie is absolutely certain that Barney has what it takes to be a great composer, and she supports him with everything in her when he decides to go ahead and try to write something big and grand. 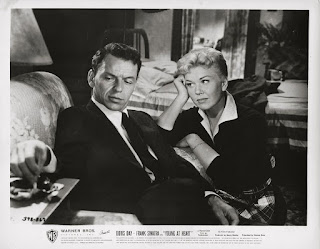 Somewhere in there, they get married.  And they have kind of a gloomy life for a while.  No matter how encouraging Laurie is, Barney remains unconvinced of his own abilities and talents.  He feels he doesn't fit in with her family and her old life, and that the life he's able to give her is just not good enough.  Barney also thinks that Laurie "settled" for him and should have married Alex instead.
But, they eventually come to really understand and cherish each other, after many lovely songs get sung.  I do wish Sinatra and Day got more than one real duet -- I've always felt like the opportunity to have these two splendid artists sing together got largely wasted, which is my only quibble with this movie.
I think what draws me to this story is the contrast because the Tuttles' polished, pretty world and the cynical Barney who has had a very hard life and can't quite see how the Tuttle family's happiness can be real.  Or can be something he can share in.  Its his gradual blossoming, and the way that Laurie gets to shed some of her own glossy ideas about life, that makes me want to watch this movie over and over.  Culture clashes are always interesting to me, even when they're not huge ones.
Is this movie family friendly?  Yup, it is. 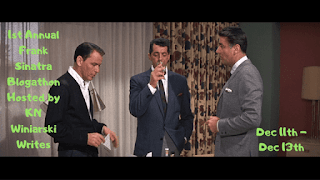 This has been my contribution to the First Annual Frank Sinatra Blogathon hosted by KN Winiarski Writes.
Posted by Hamlette (Rachel) at 3:22 PM