Why Do I Love Han Solo? 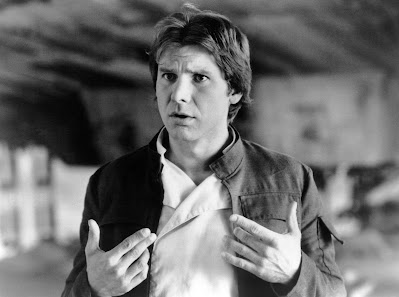 A couple of years ago, I started to wonder if I really loved Han Solo (Harrison Ford) best of all Star Wars characters.  I mean, he's been my favorite since I saw the original trilogy for my first time when I was in my early teens.  Maybe I just kept loving him out of nostalgia mixed with loyalty?  That happens to me sometimes, that I insist something is still my favorite even if I discover something else I like better right now.  (This happens to me with ice cream flavors, for instance.  I say mint chocolate chip is my favorite, but if you give me a good mocha ice cream, I will probably like it better.)
However, this summer, I showed my kids the original Star Wars trilogy over the course of just a few days.  And I realized that nope, it's not nostalgia.  It's not loyalty.  I really do love Han Solo best.  No other Star Wars character makes my eyes shine and my lips curve up and my heart beat a little faster the way that he does.
And it's not just because Harrison Ford is one of my favorite actors.  Nope, I still love Han even when he's played by Alden Ehrenreich.  Though I do prefer him when he's played by Harrison Ford, Han Solo is Han Solo, either way.

So, why do I love him, anyway?
I think I love Han Solo because he needs to be loved.
In fact, that right there -- that nutshell of a sentence -- is basically why I love many of my favorite characters.  Maybe even most of them.  Possibly all of them, now that I think about it.

I love Han Solo because, when we first meet him, he's convinced he's unlovable.  He's trying his best NOT to be lovable.  He doesn't need any friends except Chewbacca.  He is too cool to care about people, and too cool to care if other people care about him.  (Shh, that sentence totally made sense.)
My dudes and dudettes, you do not get that way by being a happy person.  Show me someone who insists "I don't need anybody" and I will see a person who has been hurt in the past, and hurt badly.  Who is still hurting.  Who desperately needs someone to care about them, care for them. 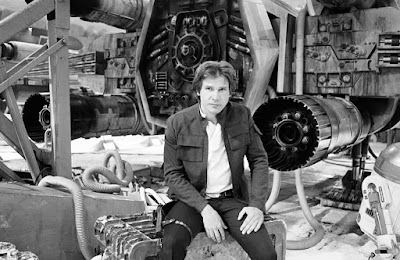 I volunteer as tribute!  I will care about you, Han Solo!!!  I will dedicate the Star Wars section of my heart to caring about you.  Vehemently.  Passionately.  For decades.  Unreservedly.  You are now mine, I am now yours, and that's what makes the world go 'round.
I think that's why I like Solo: A Star Wars Story (2018) so much.  It confirms my belief that Han Solo had been hurt in the past and had created his I'm-too-cool defensive shields as a result.
Anyway.  This post is totally a ramble by now.  But yes, I love Han Solo because he needs someone to love him.  And, over the course of the original trilogy, he finds such people!  Or, such people find him.  He makes actual friends.  He falls in love with someone who loves him back.  He learns how to be caring, how to be cared for, and his whole outlook on life changes as a result. 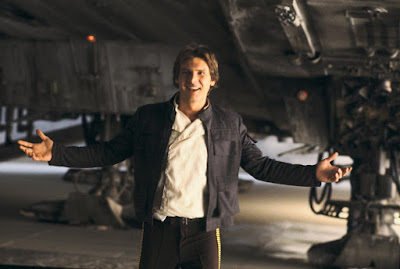 Also, he's sarcastic.  I love sarcastic characters.  And characters who are super nice and kind and helpful inside, even if you can't always tell at first.  Han didn't become a helpful guy, he always was helpful, even while he was also a scoundrel.  He's right, you know, when he tells Leia that he's a nice man.  He is.  A nice man AND a scoundrel -- not an impossible combination, you know!  Simply an irresistible one.  I could eat him up with a spoon. 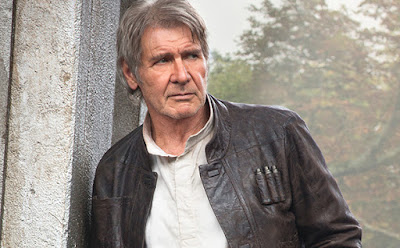 So, yeah, I do love Han Solo best, of of all the thousands of characters in the Star Wars universe.  He's a cynic who learns to hope, a loner who learns to befriend, and a hotshot who will always be the best pilot in the galaxy, as far as I'm concerned. 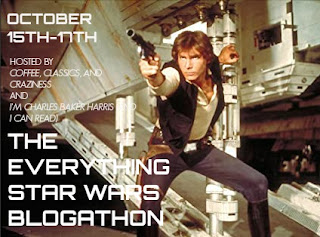 This has been my first contribution for the Everything Star Wars Blogathon hosted by Coffee, Classics, and Craziness and I'm Charles Baker Harris (And I Can Read).  Come back tomorrow to find out why I love Cassian Andor!
Posted by Hamlette (Rachel) at 9:40 AM