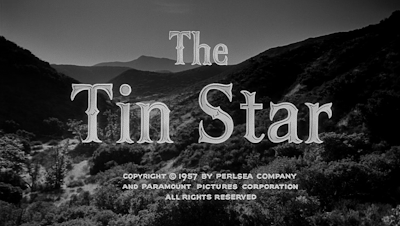 I've mentioned a couple of times that I listened to Elmer Bernstein's score for this movie almost exclusively while writing One Bad Apple.  Now that I've got that book firmly out into the world, I decided to rewatch the movie to see how the music applies to the story it was written for, rather than to mine.  This was a little surreal at times, I admit.

Anyway, this is my favorite Henry Fonda movie.  I'm not a big fan of his, usually, but he does have a few roles where I like him, and this is the main one. 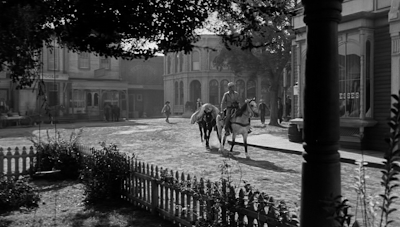 It all begins when a stranger arrives in town (my favorite storyline, you know).  He's leading a pack horse that's got a grisly burden. 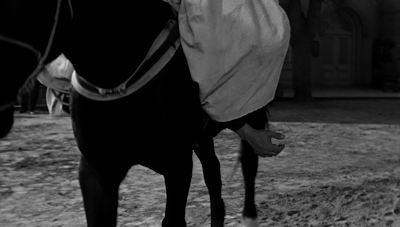 We zoom in on the hand hanging out from under its covering just to be sure the audience knows what's under there.  Which I wouldn't really mention, except that it's such a cool shot. 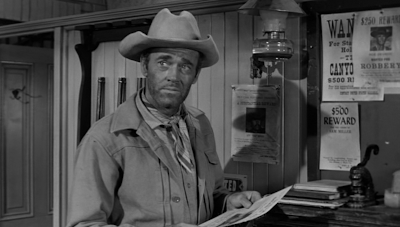 The stranger's name is Morgan Hickman (Henry Fonda), known as Morg to his friends.  Morg is a bounty hunter, here to collect on the man his pack horse is carrying.  Morg is a very pragmatic man, practical in the extreme, and also cynical.  He says that if a wanted poster says "dead or alive," it means dead, and people are just too polite to admit it.  His brusque demeanor keeps people at arm's length, including the town's young sheriff, Ben Owens (Anthony Perkins). 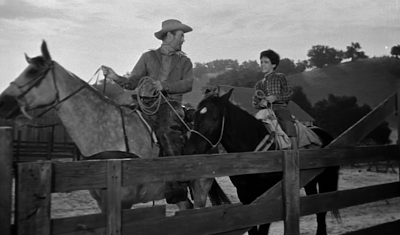 It will take a few days for the reward to arrive, so Morg sets off to find somewhere to stay.  And just when we're ready to write him off as a bitter middle-aged coot, he meets up with a boy named Kip (Michel Ray) who begs to ride his now-unburdened pack horse.  Morg gives his permission, and it's not long before he's almost genial.  Clearly, although he has little patience with many adults, he is more kindly disposed toward youngsters. 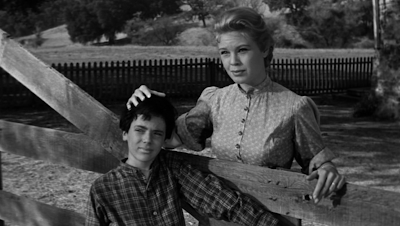 Kip says that if Morg needs a place to stay, he could stay with Kip and his mom, Nona Mayfield (Betsy Palmer).  She seconds the invitation, and Morg doesn't need much convincing.  He's taken a liking to the bright, cheerful Kip, and he finds Kip's widowed mother intriguing. 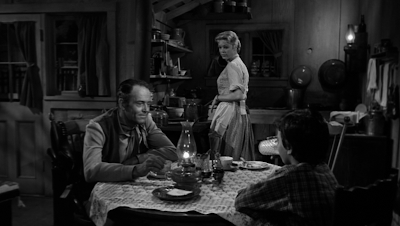 As for Nona, she quickly learns that Morg is a man of good sense, a strict moral code, and sound judgment.  And also that he's hungry for human companionship, even if he won't admit it.  In a way, he's a bit like the title character of Shane (1953), a drifter with a very specific skill set who stumbles upon a family with their own set of troubles that he just might be able to help in some way or other.  Except, of course, that he has no plans to settle down in this town or take on familial responsibilities in any way.  He's just here to get his reward, and then off he'll go in search of his next bounty. 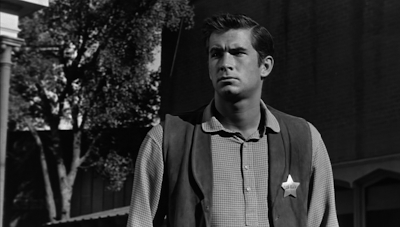 Against his will, Morg also starts getting to know Sheriff Ben Owens.  Owens is clearly in over his head as sheriff.  He's got a fast draw, but he's not prepared for the nitty gritty of law enforcement.  He's soft-spoken and shy, stumbling over his words whenever he's nervous.  And he's always nervous around Morg, whom he almost instantly begins to look up to.  Time and again, he asks Morg to be his deputy.  Time and again, Morg refuses.  He thinks Ben won't last long as a lawman, but he refuses to rescue him either. 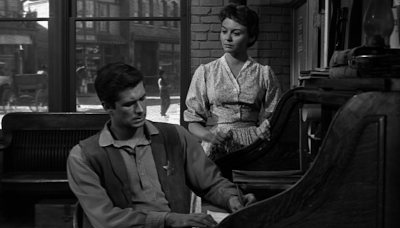 Ben's girlfriend Millie (Mary Webster) doesn't want him to be the sheriff either.  Her father was the last sheriff, and she doesn't want to lose another man she loves while he's pursuing his duties.  But the more people suggest Ben shouldn't be a lawman, the more stubbornly he insists he has to do this job to the best of his abilities until someone more suitable comes along.  He was duly elected sheriff, and he is not going to let down the townsfolk if he can possibly help it.  We start to admire his dogged determination, and his willingness to learn from Morg if he can only convince Morg to give him some advice. 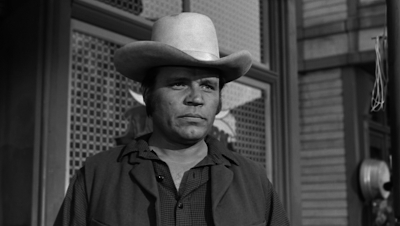 Someone else in town has his eye on the job as sheriff, namely Bart Bogardus (Neville Brand).  He just happens to be related to the dead man that Morg brought in to collect bounty on, and he constantly antagonizes both Ben and Morg, trying to goad them into a fight. 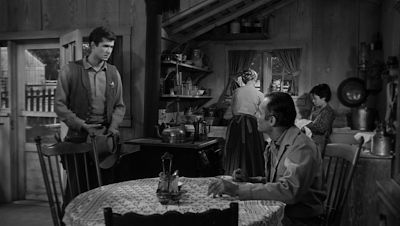 Morg shuns Ben's pleas for assistance. Morg likes the quiet slice of life he's enjoying in his rented home with Nona and Kip.  As a bounty hunter, he's used to being an outcast, but he's discovered that Nona and Kip are outcasts too.  Why?  Because Nona married an American Indian.  Kip is only half-white.  And that makes many of the townsfolk look down on both Nona and Kip, even ostracize them.

Morg begins to feel a kinship to them, to feel protective of them both.  He and Nona quietly and calmly come to value each other and understand that, at last, they have each found someone to share their lives with.  Both previously married and widowed, they harbor no silly romantic notions, yet clearly are attracted to each other.  I love their relationship, as it's realistic, sensible, and yet sweet. 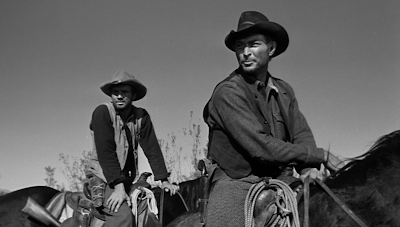 And then there's these two.  Zeke (Peter Baldwin) and Ed (Lee Van Cleef) McGaffey are lowlife trash that hang around town, are sometimes involved in petty crimes, and generally stink of trouble.  Which they cause soon enough, and lots of it. 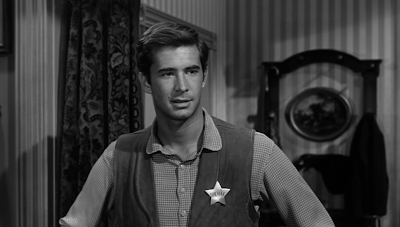 Ben Owens is probably also my favorite Anthony Perkins role.  He's sweet, kind, innocent, game, stubborn, and stalwart.  I want to shake his naivete out of him sometimes, but he has the makings of a very good man, if he can just live long enough to live up to his potential. 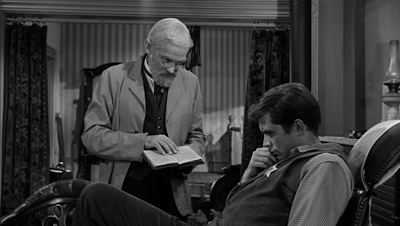 I haven't yet mentioned Doc McCord (John McIntire).  He's like the conscience for the whole town.  And the history of the whole town.  He's been there so long, he delivered Ben and a lot of the other people in those parts, a fact he delights in reminding people of.  He's a wise and perspicacious guy, and I dig him. 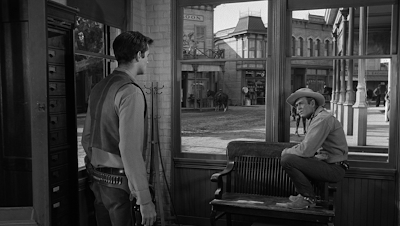 This shot is only here because I find it really hilarious that Henry Fonda is perched on this bench this way for basically the whole scene.  For no reason that is ever explained.  He's just sitting there on the arm of the bench like that.  Because he can. 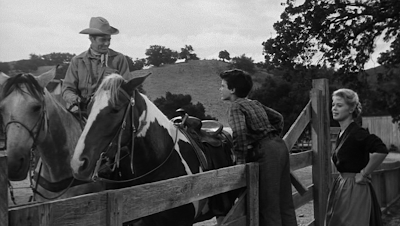 Anyway, Morg's getting set to leave.  He buys Kip a pony with part of the reward money that's come in at last.  Kip doesn't realize it, but Nona sees that this is the beginning of goodbye. 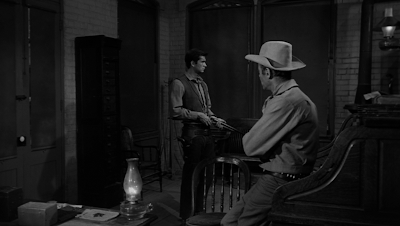 But, of course, the plot intervenes, and Morg ends up having to put aside his reluctance to pin on a badge (which he explained, don't worry) and help Ben because he knows that, if he doesn't, the kid's just gonna die.  Also, there's a lynch mob trying to hang a couple of killers that Ben's got locked in jail, and, well, this is the movie that I had to rewatch to make myself have any shred of liking for Henry Fonda a decade or so ago when I watched The Ox-Bow Incident (1943), which I Do Not Like At All and Will Never Watch Again.  Ugh. 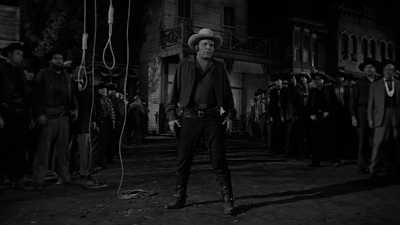 Neville Brand sure can play mean and nasty when he wants to.  Isn't this a fantastic shot?  Look at the composition, with him standing in the foreground and all the townsfolk kind of angling off on both sides, and those two nooses making his intentions plain.  Such a bully, even the people backing him up aren't actually willing to stand behind him. 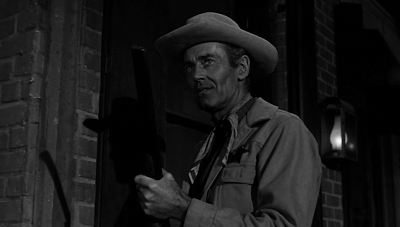 Henry Fonda really shines in this role.  He's calm, capable, no-nonsense, and impossible to ruffle.  If you know of any other movies where he plays similar roles, let me know, because the only other one I can think of is his tiny role as Teddy Roosevelt Jr. in The Longest Day (1962), which is the only other thing I totally like him in.

SPOILER ALERT: Skip to below the picture that says "The End" if you don't want the whole ending spoiled. 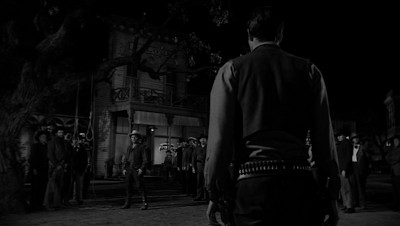 Ben stands on his own two feet at last, no stammering, no backing down.  All he needed was a mentor for a few days. 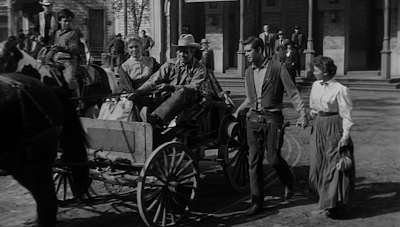 All's well that ends better!  Ben survives his trial by fire AND wins the affections of Millie for good.  Morg, Nona, and Kip head off together toward the new life they're going to make together.  It's a happier ending that I ever expected the first time I watched this -- I was just sure that Morg was going to end up dying to save Ben's life, or Ben was going to die and Morg was going to take the job as sheriff, but nope!  They both survive.  I dig it so much. 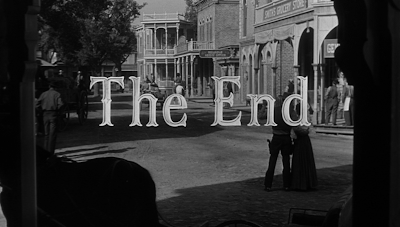 You know I love intelligent, thought-provoking westerns that spend the time to develop fully rounded characters, and this one does exactly that.  They make the eventual gunfights and other action pieces actually matter, instead of just being flashy, noisy entertainment.

Anyway, that's all I've got to say about this somewhat obscure western that deserves a lot more attention than it gets.  Adios!
Posted by Hamlette (Rachel) at 11:19 AM