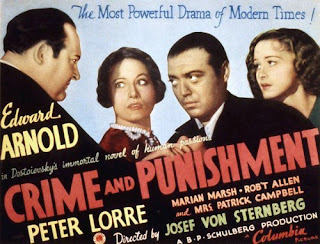 Roderick Raskolnikov (Peter Lorre) believes that some people are superior to ordinary people and shouldn't be held to the same moral standards as the rest of us.  And he's convinced he's one such person.  He murders someone, and thinks he should be able to get away with it because he's just such a superior being.  Only he's racked with guilt, punishing himself mentally for the crime for a long time, until he finally confesses it to the police.

I didn't realize it before, but I see now that Hitchcock's 1948 film Rope is obviously a retelling of Crime and Punishment by Dostoevsky.

There, I've saved you an hour and twenty-five minutes of your life that you don't have to spend watching this thoroughly depressing movie.  Go watch something enjoyable and uplifting instead.

(But if you want to be thoroughly depressed, you can watch this here on YouTube.)
Posted by Hamlette (Rachel) at 7:51 AM