I first encountered Bobby Darin through his music, so of course I'm going to dedicate a couple of posts this week to my favorite songs of his.  I thought I'd do a top ten list, but I want to link to videos of each song, which gets kind of long for ten songs, so I'm splitting the list in half.  Here are numbers 10-6, and I'll do another post later this week with numbers 5-1. 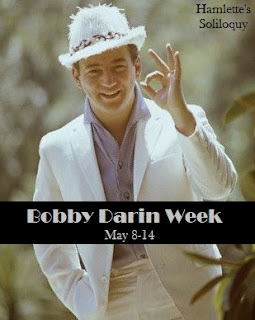 10.  "Hi De Ho" is a bluesy, jazzy, funky little number he performed live later in his career.  It's got such a marvelous swagger to it, and I can't help but grin when I hear it.  I was listening to a different live version of this a lot while doing revisions on "The Man on the Buckskin Horse" because it gives me a confidence boost.  This is a live version from 1970 that also features him playing the harmonica, and since Bobby's live performances are electric, I thought I'd share this version so you could see him strut his stuff.


9.  "Amy" is from my favorite Bobby Darin movie, Gunfight in Abilene.  This is the version released as a record, not quite the same as the one used during the movie, but it's still a lovely song.


8.  "She Knows" has a very different sound from that previous song, even though it's also a love song.  It's minor, for one thing, and kind of brash, more sexy than sweet.


7.  "Change" is a song that makes me think.  It's helped me accept some changes in my life over the past few years, and probably will in the future as well.  It's from the late '60s, when Bobby was into protest songs and folk songs, trying to help the world, well, change.  Warning: it does have the word "damned" repeated in it, so if that would bother you, skip this one.


6.  "Somewhere" is his take on the famous love song from West Side Story.  It's Bobby at his most tender.  The first time I listened to this, I cried.


That's all the Bobby Darin goodness I have for you today.  I hope you've enjoyed these, and if you want more... there's more.  He recorded hundreds and hundreds of songs, most of which are available on CD, and many of which you can find on YouTube.
Posted by Hamlette (Rachel) at 12:10 PM