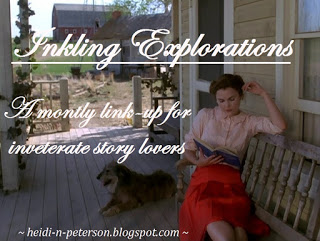 This month's Inkling Explorations subject is "A Christmastide Movie Scene."  As soon as I read that, I knew I wanted to share a scene from The Monuments Men (2014).  You can watch the whole scene here on YouTube, but I'm going to describe it for you here for those who don't want to watch it without having seen the movie, or who have small children in the room (part of it involves some blood).

So The Monuments Men is about a bunch of Allies who try to recover all kinds of artwork that the Nazis have been stealing and hoarding, which is based on something that actually happened during WWII.  Throughout the first half of the film, Campbell (Bill Murray) and Savitz (Bob Balaban) have been very antagonistic toward each other.  Savitz thinks Campbell is an uncultured swine, and Campbell thinks Savitz is a pretentious snob.  But they have to share a tent in camp, and they keep getting sent out on assignments together even though everyone knows they dislike each other.

In this scene, Campbell and Savitz have gotten Christmas packages from their families.

Campbell's is full of snapshots and little homemade gifts.

Savitz has received tasty treats that he clearly has no intention of sharing.

Campbell also gets a record, a message his family has sent him that presumably holds Christmas greetings.  (I'm instantly reminded of one of my favorite Combat! episodes, "Just for the Record," which involves Sgt. Saunders [Vic Morrow] receiving a similar record and risking his life to hear it.)

Campbell makes a joke about having to confiscate a phonograph so he can hear it, sets the record aside, and leaves to take a shower.

And while he's in the shower, over the loudspeaker comes the voice of his daughter.  Campbell looks up in wonder as he hears his daughter and grandchildren wish him a merry Christmas.  He turns off the shower and just stands there, listening.

(By this point in the movie, I have tears running down my cheeks.  I'm actually crying right now as I type this up.)  He's got no idea how this miracle has come about.

But we, the audience, know.  Savitz has taken the record of this man he professes to dislike, commandeered the camp loudspeaker system, and is playing the record so that Campbell will get to hear these messages from home.

And then Campbell's daughter begins to sing "Have Yourself a Merry Little Christmas."

This scene has been intercutting with the interior of an aid station, where two other characters bring a wounded soldier they found by the road.

The song continues as a doctor examines the soldier, realizes he's dying, and orders morphine for him to ease his final moments.

Nobody here is having a merry Christmas.  And yet, Christmas goes on whether people are merry or not, doesn't it?  Because in the end, Christmas isn't about merriment.  It's about the pain of childbirth, the miraculous incarnation of God as a tiny child, and the wonder of an undeserved gift not for one person, but for all mankind.

Now, I said in my title that this is about TWO merry (or actually not-so-merry) Christmases.  Because the song "Have Yourself a Merry Little Christmas" debuted in the movie Meet Me in St. Louis (1944), where big sister Esther (Judy Garland) sang it to her littlest sister Tootie (Margaret O'Brien) to try to cheer her up.  You see, their father has decreed that the family will be moving to New York City after Christmas, and the whole family is very sad and upset about this.  So although Esther is singing about light hearts, their troubles are definitely not out of sight.  She says that "through the years, we all will be together," but she's contemplating staying behind in St. Louis, so she knows that much of what she sings in this song might not come true.  It's also a very sad scene, and I'm going to share it here.


Meet Me in St. Louis is one of my daughters' favorite movies, and we watch it regularly.  (And yes, we nicknamed my littlest mouse "Tootie" after Margaret O'Brien's character).  If you haven't seen it, I can wholeheartedly recommend it as a family-friendly delight.  The Monuments Men is also one of my personal favorites, but it's not for younger viewers.  You can read my full review of it here.

Despite the melancholy of these two scenes I've shared here, both of these movies are actually very uplifting and end happily!  And despite the fact that I've chosen to share two Christmas scenes that make me cry, I actually love Christmas and am generally in a happy, bouncy mood from Thanksgiving on.  Honest!

Don't forget to visit Sharing the Journey to read other entries to this month's link-up!  Most of them probably don't involve a blogger crying while she types...
Posted by Hamlette (Rachel) at 5:37 PM