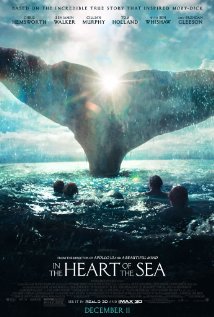 This movie was supposed to come out way back in like March, and I really wish it had.  Not only because I had to wait an extra 9 months for it, but because honestly, whose bright idea was it to have this open the weekend before Star Wars:  The Force Awakens?  What even?  People who only see a movie every now and then were going to go to SW:TFA.  People who like to see lots of movies but are very busy at Christmastime were going to go see SW:TFA.  People who only go to movies once in a blue moon but felt like going to see a movie this month were going to see SW:TFA.  Which means the only people who would make the effort to get to the theater to see In the Heart of the Sea would be people who truly wanted to see this particular movie.

People like me.  Because today I dodged around all my fellow Star Wars fans and plunked down my money to see this instead.  (Fear not!  I do intend to see Star Wars, but not until after Christmas.)  Because I have been eagerly anticipating this movie since last December, when I saw one trailer for it and said, "Tall Ships, Chris Hemsworth, Ron Howard, and Moby-Dick?  I AM SO THERE!"

And so there I was.  In a theater the second weekend of In the Heart of the Sea's run, just me and four other people.  I felt very sad for the movie and all those involved because it's really good!  And no one is caring!

I'm sure SW:TFA is splendid.  I'm excited to see it.  But this movie is also splendid, and I wish more people were excited about it.  I'm pouting.

Anyway.  I have only seen this once, so my thoughts and understanding of the movie may change after I see it again when it comes to DVD, but from this first viewing, my impression is that this is a movie about the difference between determination and stubbornness.

The movie is framed as an account told to Herman Melville (Ben Whishaw) by the last surviving member of a whaler named the Essex, one Tom Nickerson (Brendan Gleeson in the framing, Tom Holland in the story).  Nickerson's experiences aboard the Essex have haunted him all his life, and his wife hopes that by finally confessing the tale, he will be able to live in peace.  Melville is hungry for the truth about a story he's heard for many years and wants to turn into a novel. 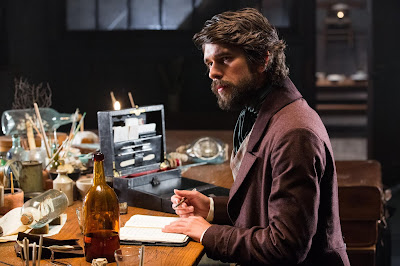 So the story begins.  Owen Chase (Chris Hemsworth) is successful and well-respected whaler who had been promised captaincy of a ship for his next voyage.  But the owners of the whaling company instead make him first mate under George Pollard (Benjamin Walker), scion of a wealthy whaling family.  It's Pollard's first voyage, and he is bent on proving himself a better seaman and person than Chase by countermanding Chase's sensible orders and imperiling both ship and crew time and again.  The whole situation smacks of Mutiny on the H.M.S. Bounty for a while. 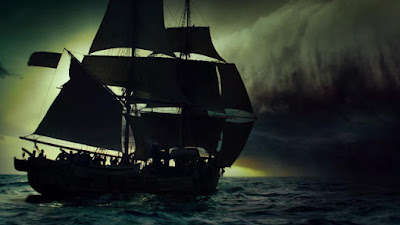 Then they find some whales and have some whaling adventures, run out of whales, get desperate, and go sailing off into the Pacific in search of whales despite having been warned about a demonic white whale that haunts those waters like a vengeful ghost.  And then all sorts of bad things happen and people die and it's by turns exciting and scary and suspenseful.  Chase remains determined, and Pollard learns to change from stubborn to determined, and Chase learns that killing animals just because you can is a bad idea, and also there's a lot of ocean.

Throughout the story, we come back to Melville and Nickerson occasionally, seeing the way telling the truth is affecting the elderly seaman.  At first he's angry and antagonistic, then he's annoyed, then he's caught up in his tale, and finally he finds absolution for some of the things he and the others did to survive.  Really, the scenes between them were my favorites, and I can't believe I'm saying that because that's the part Chris Hemsworth and the tall ships aren't in!  But they were superb.  Whishaw's Melville had just the right blend of curiosity and writerly eagerness at first, changing into a sort of horrified fascination, and ending with a confidence that he had found what he needed.

But anyway.  Good movie.  I love the soundtrack and will probably end up buying it.  Oh!  And Joseph Mawle was in it too!  I love him as Captain Harville in the 2007 Persuasion, so it was awesome to see him aboard a ship, and he had a really nice character.

Also, Chris Hemsworth was wonderful.  Even more wonderful than I'd hoped.  Just so you know. 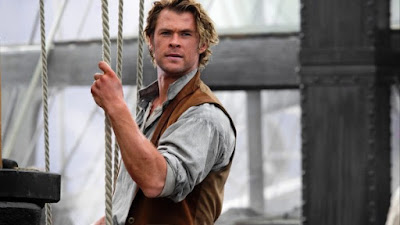 Is this movie family-friendly?  Um, not for youngsters cuz hello, it's really intense and has some scary stuff too.  Also some old-fashioned cursing sprinkled throughout, including taking God's name in vain.

Once I've seen it again in a few months, I think I will have some interesting thoughts on comparing it to director Ron Howard's other wonderful movie about men surviving an unexpectedly terrifying voyage, Apollo 13 (1995), but for now... if you like Tall Ships, Chris Hemsworth, Ron Howard, or Moby-Dick, please brave the Star Wars crowds and go see this.
Posted by Hamlette (Rachel) at 3:52 PM