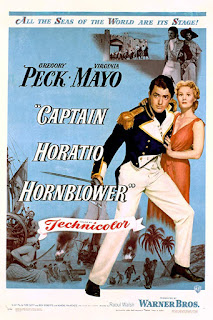 Guess who I found at the library this week? Gregory Peck as Captain Horatio Hornblower!!! I just watched it this morning, and oh boy, is it a good one! It's going on my Christmas list straight away.

I've been wanting to see this movie ever since I first heard about it when I was introduced to the character ten years ago. One of my mom's friends loaned her three of the A&E Hornblower movies starring Ioan Gruffudd and told her about the old Gregory Peck version as well. Of course, I instantly fell madly in love with both Ioan Gruffudd and the character of Horatio Hornblower as soon as I watched the A&E movies. Although I regret to admit I haven't read any of the books by C. S. Forester, I'm hoping maybe this library will have them. 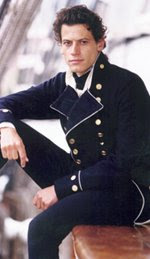 Anyway, great swashbuckling tale! Gregory Peck makes a wonderful Hornblower, as one might expect. And you know, he even almost looks a little like an older version of Ioan Gruffudd, so it all works very nicely. This movie is based on what I believe was the first HH book written, while the A&E series begins with the beginning of HH's career as a midshipman, which Forester seems to have written about later. This involves his affair with Lady Barbara Wellesley, played adeptly by Virginia Mayo. Of course, it also involves several naval battles and lots of fun sailorly stuff.

And now I'm totally in the mood for more Hornblowerful adventures, so I think as soon as Dano takes his next nap, I'm going to put in "The Duel." This is turning out to be a rather nice Monday after all!
Posted by Hamlette (Rachel) at 1:34 PM