Only four weeks left to go! Give or take, but how many people actually deliver on their due dates anyway?

As of my checkup this week, I had gained 23 pounds, so that's right in the healthy range between 20 and 35. My nurse/midwife checked my cervix and said that it's softening and maybe starting to thin a little bit, but not effacing yet, so I'm likely not going to be delivering in the next week or two. Next week, number 37, I'll be considered full term and Gumdrop will be ready to be born at any moment and not be considered premature. He's a good boy, even if he does kick me in and pummel me and head-butt me all the time -- he's positioned head-down 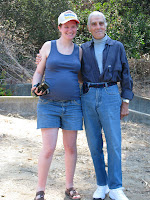 and with his back to my front, which means if he stays this way he won't be breech, and also means I probably won't have back labor. What a good Gumdrop! Now if we could just do something about those feet shoving against my rib cage all the time....

Anyway, I don't have any pictures of just me at this stage, but here is one of me and Pierre Jalbert at Recon last month -- it's about 4 weeks old already, but you can at least kind of see how I'm developing. Now that I have my new digital camera, I'll try to get Cowboy to take some pics in the next day or two. But for now, this'll have to do. Plus, Pierre! Woo!!!
Posted by Hamlette (Rachel) at 9:23 AM