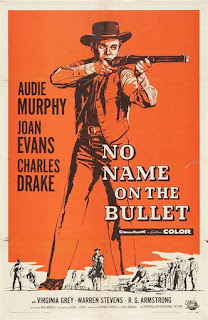 I'm still trying to figure out what I think about this movie.  I liked it lots and lots and lots... until the last few minutes, and then it all sort of fell apart in a tangled heap.

John Gant (Audie Murphy) shows up in a small, prosperous town.  When he tells the hotel clerk what his name is, everyone playing poker in the hotel lobby freaks out.  Why?  Because Gant has a reputation for showing up in a town, goading someone into drawing on him, killing them in a legal fight, then collecting handsomely from whoever hired him to dispatch that particular victim.

And nobody knows why he's here, who he's after.  Suddenly, guilty consciences go into overdrive, and anyone who's been involved in something illegal or underhanded or vicious gets awfully edgy.  Someone commits suicide.  Other people start gunning each other down.  As the town's seemingly solid citizens show their true colors, Gant sits in the hotel lobby drinking coffee and smirking grimly.

So far, so good.  It was quite awesome, in fact.  Dude just shows up, never says he's even here to kill someone, and the psychological thrills begin.

Then there's this really nice doctor (Charles Drake) and his blacksmith father (R. G. Armstrong).  They're the only people in the whole town who don't freak out, who are friendly and nice to Gant.  The doctor and Gant almost become friends.  They play chess together.  They start to trust each other.  When the other townsfolk collect themselves up into a mob to go try to run Gant out of town, the doctor tries to stop them, and Gant misunderstands and thinks he's with them, and I was just brimming over with sadness and affection for these two guys, and so eager to see how they'd come to be able to trust and respect each other again.

In fact, through the whole movie, I was half suspecting that Gant wasn't actually there to kill anyone at all.  That he just liked to show up in a town and scare the miscreants enough to make them show what they were really like, and then move on once the town was cleaner than it had been before.  Like a sort of scouring powder, scrubbing away corruption and sin.  I figured that at some point, we'd learn what was behind that smirk, and learn just why he conducted such unusual business.

Except that didn't happen.  In the last act, the whole thing unraveled.  Gant goaded his mark by implying that he'd assaulted a woman, making his mark angry enough to try to gun him down, and then... Gant didn't even kill him.  But other people think he did, and he ends up leaving town wounded and alone and without a shred of character development, and I was so disappointed, I sulked.  Because they had done all this gorgeous setting-up and then just dropped the whole cake on the floor and said, "Oh well."

So, I'm not sorry I watched this, because I learned a lot of good storytelling stuff from it, but I sure am disappointed it didn't live up to the promises it made.
Posted by Hamlette (Rachel) at 6:39 PM