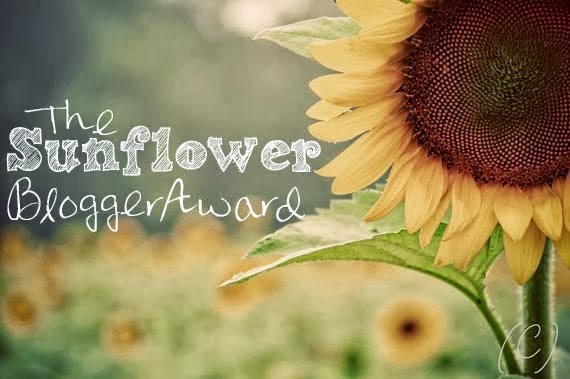 Victoria over at Hope Writer and Lizzie of His Redeemed Child (edit) AND Whimsey Keith AND Heidi of The Far Side of Forever have all nominated me for the Sunflower Blogger Award.  Isn't that sweet?  What a sunny way to brighten up the dregs of winter :-)

1.  My second-favorite candy bar is Almond Joy.
2.  I eat peanut butter straight out of the jar.  With a spoon -- stop looking at me askance.
3.  I hate wearing shoes and socks.
4.  If I had been a boy, my name would have been John.
5.  I was in the chorus of three Gilbert and Sullivan musicals while I was in college.
6.  I was born near where Jesse James robbed his first train.
7.  I've never had a haircut.  I just get it trimmed every six months or so.
8.  I collect Coca-cola stuff, and my kitchen is decorated with Coke items.
9.  I've had the same favorite movie since I was 2 1/2 years old (The Man from Snowy River).
10.  My seasonal allergies disappeared after I gave birth to my first child.
11.  My favorite candy bar is Snickers (in case you've been wondering since fact 1).

Here are my answers to Victoria's questions:

What time period would you travel back to if you had the chance? Why?

The Old West, of course.  I'd do as much research as possible, drink in the atmosphere and clothes and dirt and dialect and everything about life back then.  Then I'd come back to the present and write smashing novels unlike any western novels ever written before.

Is there a book that you’ve read at least five times from beginning to end?

Sure, quite a few, actually.  I'm on my sixth read-through of The Lord of the Rings by J.R.R. Tolkien, I've read Jane Eyre by Charlotte Bronte at least five times, and I know I've read The Black Stallion by Walter Farley far more than five times.

Has the Lord done anything recently in your life that has strengthened your faith in Him?

He's given me the answer to a decision I've been wrestling with, and I feel so free and peaceful now.

What is your favorite family tradition?

Listening to Elvis' Christmas album while trimming the Christmas tree.  It's kind of a tradition I created -- as a kid, I would insist that his be the first album we put on the record player when Mom started decorating the tree, and I've just continued that throughout my adult life too.

If you could learn to do anything, what would it be?

Be more patient.  I've been working on it, but I still have a lot more patience to learn.

What has been your favorite movie this year? This can be in theaters or just from your own personal home viewing.


And here are my answers to Lizzie's questions:

What name would you choose if you could or had to change your name?

Okay, to be different from the above answer, I'll say Paris in the 1920s, like in Midnight in Paris, so I could meet my literary heroes, Hemingway and Fitzgerald.

How would you choose to spend a lovely, sunny spring day?

Planting things in my garden and containers!  I'm looking forward to doing just that very soon.

What are three of your favorite books?

To be different from above, I'll say The Count of Monte Cristo by Alexandre Dumas, The Beekeeper's Apprentice by Laurie R. King, and The Eyre Affair by Jasper Fforde.

My three absolute favorite movies are The Man from Snowy River, The Fugitive, and The Sons of Katie Elder.

Books that were made into movies?

The Fellowship of the Ring, Ben-Hur, and Master and Commander:  The Far Side of the World.

Do you play an instrument? If so, which one?

I play the piano and trumpet, and I used to play the flute, but I haven't touched one in 15 years.

If not, is there an instrument you would like to learn?

I'd like to learn to play the trumpet better than I do.

What kind of pets/animals do have, if any? If none, what would you like to have?

We currently have a Betta fish named Winter.  But I'd like to have a large dog.  Some day, when the kids are older, maybe we will.


(edit) Here are my answers to Whimsey's Questions:

If you ever were to meet John Cleese from Monty Python in person, what would you say? :)

"Is Michael Palin as nice in real life as he seems?"

If Anne Elliot and Jane Eyre were real people, which one would you rather meet?

(You are a mean person, Whimsey.  What a choice!!!)  Oh, probably Anne Elliot.  I think we'd get along better than Jane and I would.  I've noticed that I don't always get along with other strong-minded, take-charge women -- we both want to take charge, hee!

Goats.  I've never had a goat spit at me, but a llama spat right in my face at a petting zoo once.

What is your favorite vegetable?

I know that you are a homeschool mother! Which subject is your favorite to teach so far?

Art, because I can include all three kids in the same lesson.  And they have so much fun expressing themselves in ways I wouldn't have imagined doing.


(Edit) Here are my answers to Heidi's Questions:

If you could meet one person from history, who would it be?

What book have you read more times than any other?

Picture books aside, probably either The Black Stallion by Walter Farley or The Indian in the Cupboard by Lynne Reid Banks

What was the first movie you saw in a theater?

I have no idea.  The first movie I can remember seeing on the big screen and not just that I saw it was The Return to Snowy River, which greatly disappointed me.

Spring and fall are the most creative for me, but I love snow... just not summer, I don't like heat.

If you could be part of any race from Middle Earth, what race would you choose and why?

What is your dream vacation?

Ever since I was very young, I've dreamed of visiting Alaska and seeing the Northern Lights.

What do you think the greatest invention in modern times (since the birth of Christ) has been?

The printing press.  All kinds of great things have come about because we can spread the written word quickly and cheaply.

What was your favorite movie of 2013?

Who is your all-time favorite actor and actress? (They don't have to be living)


And now I nominate these 11 bloggers for this award:

Here are your questions:

If you had to spend the rest of your life in a different century of Earth's past, where would you spend it?
What's your favorite salad dressing?
What's the worst movie (that you liked least) you saw in 2013?
Do you paint your toenails?
What are your three favorite TV shows?
Are there any books or movies you own more than one copy of?  If so, what are they?