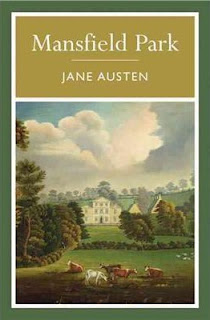 The first time I read Mansfield Park, I didn't like it much at all.  This time around, I liked it a good bit better, though it's still my least-favorite Jane Austen novel so far.  (I haven't read Northanger Abbey yet -- that's up next!)  This time, it helped that I'd just read a long discussion of this book, a conversation between A. S. Byatt and Ignes Sodre in the book Imagining Characters:  Six Conversations About Women Writers.  It helped me get a bit of perspective on the interplay between Fanny and the other characters, pointing out that while Fanny is extremely passive (which irritated me so much the first time through), she's also very observant, and much better at discerning a person's qualities and character than anyone else in the book.  I kept an eye out for instances of that when I read it this time, and found it much more interesting.

While I'm still frustrated with Fanny's overwhelming reticence, and have little sympathy with her "habits of ready submission," (p. 298) I've come to appreciate what I think Jane Austen was trying to say with this book.  It's a kind of morality play, really, full of archetypes more than realistic characters.  This book, to me, is a warning against excess -- each character pursues or possesses one character quality or flaw to such a degree that it unbalances them and makes them unable to be happy.  Henry Crawford is too proud of his own abilities to interest women, too attached to his own flirtatiousness.  Fanny Price has such low self-esteem that she believes herself to be unworthy of anyone's notice, affection, or interest except that of her elder brother, William.  Edmund Bertram is too fond of the idea of romantic love to listen to reason when applied to the object of his affections, Mary Crawford.  Mrs. Norris is so fond of being in charge that she not only runs her own life in the strictest manner possible, she alienates everyone around her by trying to run their lives too.  And so on, and so forth, et cetera, et cetera, et cetera.  The warning here, that if you lack what Edmund calls "the most valuable knowledge we could any of us acquire -- the knowledge of ourselves and our duty," (p384) you're going to wind up unhappy or annoying or both.

If you're not up on your Austen, this is the one where poor Fanny Price goes to live with her rich cousins, the Bertrams, and while growing up with them, falls in love with her cousin Edmund, possibly the most oblivious man ever written.

(Note:  It wasn't until about halfway through this reading that I realized that Filch's cat Mrs. Norris in the Harry Potter books is named after the Mrs. Norris in this book.  Also, both times I read this, I could clearly imagine Agnes Moorehead playing Mrs. Norris.  She would have been perfect -- too bad she never played the character.)
Posted by Hamlette (Rachel) at 8:48 AM