"Jane and the Unpleasantness at Scargrave Manor" by Stephanie Barron 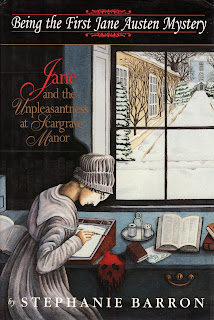 It seems that my blog has had three themes of late:  The Avengers, mysteries, and Jane Austen.  Perhaps I am stuck in a three-rutted road.  At any rate, I have just finished reading, this very evening, a book that combines two of those themes.  Not, I fear, Jane Austen and The Avengers, which, however diverting, would be an unlikely pairing.  No, this book combines Jane Austen and the murder mysteries.  It is, in fact, a mystery starring a fictionalized version of Jane Austen herself.

I know what you're thinking:  Absurd!  Travesty!  Sacrilege!

Stephanie Barron sets up her story by saying that a family friend was excavating an old building and found a trunk of letters and journals that turned out to have belonged to Jane Austen herself.  (This is very like the way that Laurie R. King sets up her Mary Russell/Sherlock Holmes books, only in them, Russell has sent a trunk full of manuscripts and oddments to King.)  This book, then, is pieced together from journal entries and letters to Austen's family members.  It does involve historical parts of Austen's life, and also a treasure trove of details about life in Austen's time.

The story begins with Jane Austen visiting her friend Isobel, the new Countess of Scargrave, who married Frederick, Lord Scargrave, a scant three weeks previous.  Jane welcomes the opportunity to visit them upon their return from a honeymoon abroad, as she has only recently accepted and then rejected the hand of Mr. Harris Bigg-Wither (honestly his real name, silly as it may seem).  But Lord Scargrave falls ill and dies following a fancy ball thrown in Isobel's honor, and Isobel is suspected of his murder.  Convinced of her friend's innocence, Jane throws all her intelligence and knowledge of humankind into discerning the truth.

The beautiful thing is, Barron has caught the cadence of Austen's writing, her phrasing and word choices, the flavor of her dialog.  At times, one can almost believe this to be based on something Austen herself wrote.  There are some similarities in situation, character, or specific lines of writing that reflect Austen's novels, which to follow this imaginary timeline, would have been published a few years later.

The author also included a number of footnotes that clarify things such as how the British justice system worked, medical practices of the day, and which characters were actual people in Jane Austen's real life.  These are especially useful for readers like myself, who enjoy Austen's work to no end, but aren't keen on researching life during the British Regency.

I do have to say that I was occasionally frustrated by the fictional Austen's tendency to rehash a character's motives after already contemplating them earlier on, and a few of the character names (a butler named Cobblestone?) stretched disbelief a bit, but overall, I enjoyed this book.  I definitely want to read more of them -- Barron has written nearly a dozen now.  Find out more on her website, where she has some intriguing thoughts on Austen, mysteries, and the art of writing.


Here is my favorite passage, which made me laugh aloud when I first read it:


"Nay, Isobel," I protested, "do not cause yourself the trouble to search further.  I believe Lieutenant Hearst will amply serve my purpose.  He has good looks and charm without the slightest suggestion of better feeling, and he possesses not a penny he may call his own.  he shall do very well for a portionless clergyman's daughter.  We may expect him to ruin me and then depart for a noble death before Buonaparte's cannon, at which point I shall throw myself in the millpond and be renowned in wine and song.  Has Scargrave a millpond, Isobel?"

See?  Great fun :-)  For those who love both Jane Austen and a good mystery, this is a treat not to be missed.
Posted by Hamlette (Rachel) at 10:12 PM