I don't know if I can answer this one.  I don't tend to love a movie and then later hate it.  Just like I don't tend to hate a movie and then later love it.  I may grow less fond of a movie over the years, or like other things better, but I pretty much never go from love to hate.  The same goes with books, actors, TV shows... once I like you, I like you. 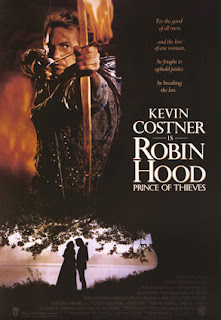 I guess the closest I can come is Robin Hood:  Prince of Theives.  When it aired on network TV years ago, my dad taped it, editing out all the scenes with the witch in them.  Johnnycake and I lurved that movie and watched it a lot.  We even got little Robin Hood action figures and made this tree fort for them out of paper towel rolls and crochet cotton and crepe paper.  I had a huge crush on Christian Slater because of that movie for quite a few years, and his Will Scarlet is still my favorite part of it.  So sad and angry, and such fabulous hair! 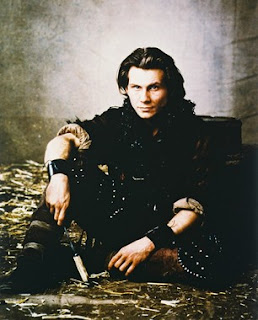 When I got to college, I bought a used copy of the movie on VHS and watched the whole thing, swear words un-dubbed and witch scenes un-removed.  Not nearly as good as the edited version my dad created.  Phooey.  Although I love Robin Hood stories and own three other versions, I ended up giving that one away because it just doesn't please me as much anymore.  I wouldn't mind watching it again sometime if I found it at the library or something, but I'm not in love with it like I once was.
Posted by Hamlette (Rachel) at 12:23 PM