Man, I've neglected this blog for a long time again, huh?  Between moving to a new state, then spending weekend after weekend house-hunting so we can get out of the apartment we're currently in (and dislike), and running about after Dano and Mercy... blogging has fallen by the way side. 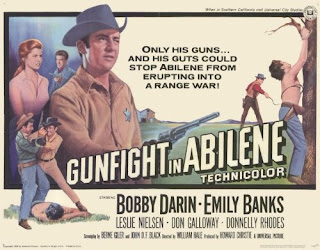 Anyway, this is a tough one to answer cuz there are a lot of movies that make me happy.  Loads of them.  So I'll pick the one that's currently making me happy:  Gunfight in Abilene (1967).  Since yesterday was Bobby Darin's birthday, I started watching this last night after I put the kids to bed, then finished it tonight.  Of the 8 or 9 Bobby Darin movies I've seen, I love this one the best, and I'm so lucky to have a copy -- they sell for like $75 now, but my dad picked this copy up for peanuts years ago.  I reeeeeally wish they'd put it on DVD; I'd buy like six copies.
Bobby Darin plays Cal Wayne, who, while he was a Confederate officer during the Civil War, accidentally shot his best friend, Dave Evers.  When he goes home to Abilene, he feels so guilty about that death that he lets the friend's older brother Grant Evers (Leslie Nielsen) steal his girl Amy (Emily Banks) and bully him into resuming his old job as sheriff, even though he's vowed never to use a gun again.  The rest is your standard cowmen-vs-farmers story, but throw in Don Galloway as his deputy, and it's an hour and a half of happy me :-)

Emily Banks was in one of my fave Star Trek eps, "Shore Leave," as the imperiled Tonia Barrows, and of course Don Galloway was in nine million westerns, both TV and film, including another one I love: The Rare Breed (1966).  He was also a regular on Ironside, and every time I see him, he makes me smile.

So, there you go, one movie among many that makes me happy :-)
Posted by Hamlette (Rachel) at 9:43 PM