I watched The Crimson Pirate (1952) last week, and all I have to say is, I haven't had that much fun watching a pirate movie since the first Pirates of the Caribbean film! I'm not saying I loved this the way I love Curse of the Black Pearl or anything, but it was a resoundingly enjoyable film. 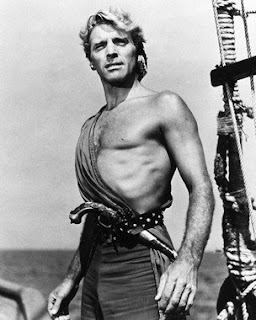 Okay, okay, a lot of that is due to the fact that Burt Lancaster spent most of his time looking like this. Though this picture doesn't do his manly biceps and triceps justice, I'm afraid. He also spent a remarkable amount of time swinging through the air while brandishing a cutlass. They definitely put his circus acrobat training to good use, that's for sure. I've never seen someone climb up and slide down so many ropes in one movie. Also, he got to dress in drag, and he makes a remarkably attractive woman. No, I'm kidding -- he makes an extremely ugly woman and no one in their right mind would ever be fooled by him in a skirt and blonde curls for a second. Which made it even funnier.

I can't actually tell you what the plot was about, as I'm a bit fuzzy on it myself. Something about stealing guns and pretending to sell them to some rebels, and then double-crossing the rebels by telling the British officials where to find the rebels, except then they decided not to do the double-cross part, except then they decided to do it after all, except... somewhere in there, I got lost. And I didn't care. The plot was entirely beside The Point, which was that Pirates Have Fun! Lots and lots of fun. They sail around and swing on ropes and taunt soldiers and walk around on the bottom of the ocean with a boat over their heads and kiss women and never, ever, ever stop smiling. Especially not Mr. Muscles And Teeth, who was having the most fun of all.
Posted by Hamlette (Rachel) at 4:45 PM