I just finished watching East Side, West Side (1949) for the first time. It stars Barbara Stanwyck, James Mason, Van Heflin, Ava Gardner, and Cyd Charisse. Yeah, quite a lineup, huh? 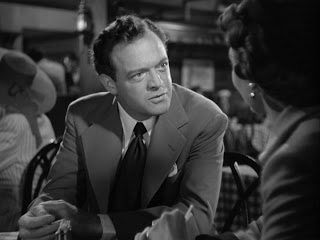 I picked it up at the library, where they'd stashed it in the Mystery section, which is about par for their decidedly odd genrefication system there. Because while a murder does occur, it's not until an hour and fifteen minutes into the movie, and it's not really the point of the movie. The point of the movie is, should the steadfast wife (Barbara Stanwyck) believe her philandering husband (James Mason) when he repeatedly promises to reform and stop seeing his old girlfriend (Ava Gardner). Or should that steadfast wife say enough is enough and start her life anew, possibly with the upright, charming cop/reporter/agent (Van Heflin) who's just wandered into her life? The murder is just a side issue, really, but the library decided that meant it should classify this as a Mystery. Which is actually a good thing, because if this movie had been lost in the vast Drama section, I probably wouldn't have seen it, borrowed it, and um, well, er, uh, heh heh... gotten a crush on Van Heflin.

This is a funny kind of crush, I've gotta say. Because I've seen Van Heflin in several movies, like 3:10 to Yuma and Shane and Battle Cry and The Three Musketeers and Grand Central Murder, and I always thought he was a good actor and okay to look at, but nothing to make me dust off my swooning couch. But boy howdy, was he just cute as a button in this! All sweet, non-home-wrecking, gosh-I-wish-I'd-met-you-before-you-married-that-jerk, upstanding, cute... and you should see him playing someone who'se pretending to be drunk! Hot diggety dog! Hamlette's having another spring fling, folks. The boy next door turned out to be a lot more interesting than she'd thought. I think I'll try to watch this one again before I take it back to the library.
Posted by Hamlette (Rachel) at 4:28 PM